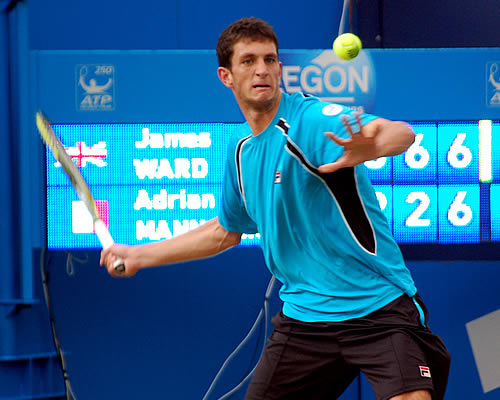 Great Britain captain Leon Smith admits his side enter their Davis Cup Euro/Africa Zone Group 1 clash with Russia as underdogs despite playing the tie on home soil in Coventry.

The quartet of James Ward, Dan Evans, Colin Fleming and Wimbledon doubles champion Jonny Marray are just one tie away from a world group play-off but without Andy Murray they face an uphill battle against a Russian team featuring former Davis Cup champion Dmitry Tursunov.

While Marray and Fleming form a high-class doubles pair, neither Ward nor Evans are ranked in the world’s top 200 singles players.

But despite that Smith insists his charges are raring to go as they continue their attempt to reach the World Group for the first time since 2009.

Smith said: “None of these games will be easy and it’s a really tough draw.
“After all the build-up we don’t have long to go now.

“The GB players have been practising hard and we can’t wait for the first match to start.”
Joining Tursunov for Russia will be rising star Evgeny Donskoy, who took a set off Murray in Indian Wells last month, Igor Kusnitsyn and 20-year-old Victor Baluda.

After a bye in the first round, this will be Britain’s first Davis Cup action since defeat at the same stage a year ago to Belgium but Fleming – the only survivor from that tie – is desperate to make home advantage count.

He said: “We are looking forward to the Davis Cup and this is the first time I will have played in Coventry.

“It is always a great weekend and it is a huge opportunity for us since it puts tennis in the spotlight. We will be the underdogs but we have a great team spirit and want to cause as many upsets as possible.

“The key for us is to give the crowd something to shout about and I think it will be an exciting weekend.”