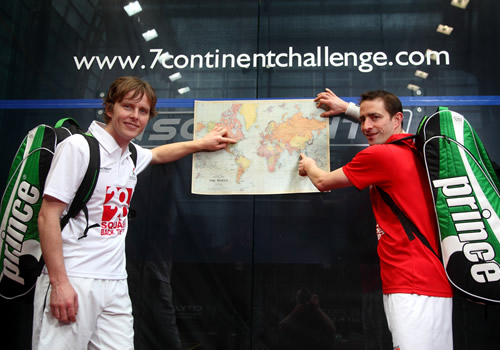 Pete Nicol and Tim Garner will embark on the challenge on Saturday Photo: Jordan Mansfield

But so great is the desire of the worldwide family of squash to join the Olympic movement in 2020 that this seems—well, almost reasonable.

But what squash players Tim Garner and Peter Nicol MBE begin on Saturday 13 April is anything but reasonable. Indeed, it does sound like madness.

The Xodus 7-Contintent Challenge will see these two men travel more than 40,000 miles and spend more than 70 hours on aeroplanes in an attempt to spread the gospel of squash to the widest possible audience.

Theirs is the latest step in a long and enthusiastic campaign that has seen a growing number of stars from other sports “Back the Bid”, most recently Roger Federer, Sachin Tendulkar, Victoria Pendleton, the England Rugby squad and 20 former Malaysian Olympic champions. And the campaign is gathering a head of steam as D-day approaches.

At the end of May, the seven shortlisted sports must each make their final presentation to the IOC in St Petersburg, with the final shortlist announced later the same day. The other six sports up against squash are baseball/softball, climbing, karate, roller sport, wakeboard, wushu, but the list has since grown to eight with the inclusion of wrestling, which was controversially axed from the current Olympic sports after Rio 2016.

Those that survive the final cull—expected to be no more than three—will go through to the IOC Session in Buenos Aires in September, where the final vote will take place.

So the Xodus 7-Contintent Challenge is very timely, but as well as raising awareness for the Squash 2020 campaign, it will also raise money for two charities close to the hearts of everyone in the squash community. The Natasha Drake Trust will help a young squash player rebuild her life after a debilitating illness, and LV-SOS Kit Aid will help give disadvantaged people from around the globe the opportunity to play and enjoy squash.

The Garner-Nicol feat of endurance will begin at the southern-most point of the journey, in the Falkland Islands. Neither has any illusions about the scale of their undertaking:

Former world No1 Nicol said: “It’s going to be incredibly tough for both of us and I’m definitely not doing it more than once!

“Tim and I believe so much that squash should be in the Olympics and this is our way of showing what a global sport squash is. The travel is going to be exhausting and we’ll be spending a lot of time running through airports and packing bags, plus our squash matches are always really competitive. But it’s a fantastic opportunity to achieve something incredible and showcase our sport in what could be a massive year for squash.”

Garner added: “Peter is pretty relaxed and he’s not great on time keeping, but I’m very organised so I think it’ll be me setting the alarm and making sure we have our passports! It’s definitely going to be an incredible adventure.”

They are already en route to their first destination, but their most recent Facebook posting reported a rather longer-than-planned stopover at the 35-square-mile, mid-Atlantic Ascension Island. Two hours turned into 10 hours because of adverse weather in the Falklands—but not to waste time, they used the delay for some warm-weather training.

One can only hope that this mad—but indisputably gutsy—duo keep enough energy in store for the rest of the their remarkable journey:

Xodus Group, already a substantial sponsor of squash, is providing financial backing for the 7-Continent Challenge. However, everyone can donate to the two charities or buy tickets for the matches via the Challenge website.