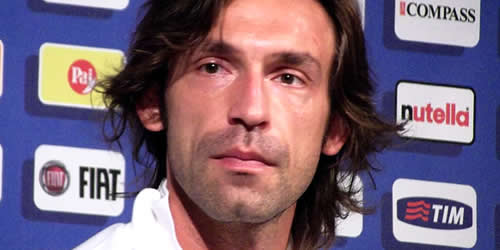 Andrea Pirlo has revealed he almost joined Chelsea but was convinced to stay at AC Milan.

The 33-year-old continues to impress for Juventus after completing a move to the Serie A champions from AC Milan in 2011.

The Italy international, who was named in Uefa’s Euro 2012 team of the tournament, spent a decorated 10 years at the San Siro, winning the Italian league title twice and two Champions League crowns.

But Pirlo has revealed that he had an agreement in place to join the Blues before Milan owner Silvio Berlusconi convinced him to stay at Milan, with the playmaker also revealing past interest from Barcelona and Real Madrid.

“I had already reached an agreement with Chelsea, but [Silvio] Berlusconi intervened and I stayed at AC Milan,” Pirlo told Voetbal Primeur.

“I was also very close to a move to Real Madrid in 2006, when coach [Fabio] Capello was there. And [Pep] Guardiola approached me in 2011 to convince me to go to Barcelona, but again it was Berlusconi who put a stop to it.”

Pirlo has scored eight goals in 83 appearances for Juve after moving to Turin from Milan in a free transfer in 2011.