Masters 2013: Rory McIlroy expects to challenge despite four bogeys on the back nine as he finished six shots off the lead 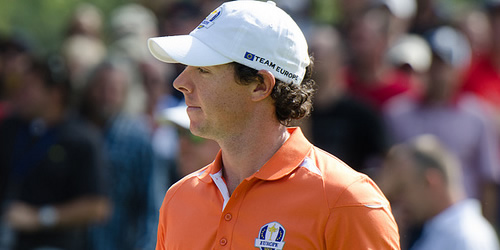 Rory McIlroy finished six shots off the lead on day one Photo: Camflan/Flickr

Rory McIlroy believes his chances of a third Major championship are still alive despite four bogeys on the back nine as he finished six shots off the lead at Augusta.

On a day of low scoring, the top 10 players are separated by just three shots, with Spain’s Sergio Garcia and Marc Leishman leading the way on six-under.

McIlroy blamed his putting for missed opportunities and dropped shots but is still confident of making a move up the leader board.

“I played really well in the front nine and I was thinking there’d be a few chances on the back nine,” said the 23-year-old.

“But I just wasn’t able to take advantage of them, I gave a few shots away with three-putts.

“I just wanted to get off to a good start, as long as you do that here the course can give you a lot of opportunities.

“For sure I can post a good score in my second round, I’ve shot some good scores on this course before.”

Pre-tournament favourite Tiger Woods’ quest for a fifth Green Jacket is in good shape after his two-under-par round but he admitted to struggling with the greens.

“It was a good day, I’m very pleased with the result, kept myself in the red but we’ve got a long way to go,” said Woods.

“Overall I think the biggest challenge today was the speed of the greens.

“It’s going to change dramatically by tomorrow afternoon and I just have to make the adjustments.”

European Ryder Cup hero Garcia’s search for a first Major is on track after going four-under-par for his first ten holes, a performance he regarded as his best ever at the Augusta National.

“The first ten are easily the best ten I’ve played at the Masters, no doubt about it,” said the Spaniard.

“The way I hit the ball was very good but then I hit a bad tee-shot at the 11th and it went a bit downhill from there.

“But if you hit the ball well it was there for the taking, you just have to be accurate.”

England’s David Lynn only qualified for the Masters with a second-placed finish behind McIlroy at the 2012 US PGA Championship, but he started well to set the early pace.

Lynn finished on four-under-par to sit tied for fourth, and said last year’s performance at the US PGA gave him the confidence to perform at Majors.

“When I am on my game I know I can compete at this,” he said.

“I’m not going to sit here and say I’m going to be there Sunday night.

“But deep down I know that I’ve got performances in me that could put me there.”

World number three Justin Rose finished second behind Woods at the recent Bay Hill International, and was delighted with his opening two-under-par round.

“It was a perfect, solid start, nothing dramatic out there, I felt like I ticked along and played great golf the first 14 holes,” said the Englishman.

“All aspects of my game feel there or thereabouts, it’s just about piecing it together in one week but everything feels right.”

Fellow Englishman Lee Westwood also finished on two-under and was pleased after changing his putter before starting the round.

“It was a good decision, I putted well today, rolled the ball really nicely and made a lot of four or five-footers,” said the former world number one.

“I think there’s a good score on, the greens are holding fairly well and there’s not a lot of wind out there.”

Tied for the lead with Garcia is Australian Leishman, who is bidding to become the first Australian winner in his debut Masters Appearance.

“It’s only Thursday afternoon so there’s a lot of golf to play but I feel good about my game,” he said.

“It’s nice being here and hopefully I can still be here at the end of the week.”

Chinese prodigy Guan Tianlang was a contender for round of the day with his one-over-par 73, to finish as the leading amateur.

“I think I can make the cut but I’m not going to push myself too hard – just have fun,” said the 14-year-old.

Wales’ Jamie Donaldson struck a hole-in-one at the sixth on his Masters debut, but dropped four shots on the back nine to finish two-over-par.

“To see it go in was pretty amazing – it’s nice when it goes in off the tee and you don’t have to putt,” he said.