Masters 2013: World No1 Tiger Woods is under pressure to withdraw after receiving a two-shot penalty for an illegal drop 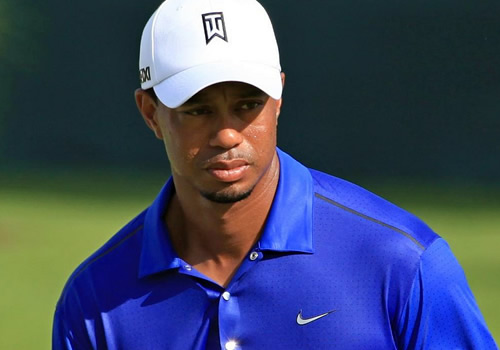 Tiger Woods’ hopes of a first major title since 2008 took a blow after the world number one received a two-shot penalty for an illegal drop at the Masters.

Ironically, it was Woods’ own explanation of his actions on the 15th hole – in which he admitted moving the ball two yards behind the spot of his original shot – which highlighted the issue.

“I went down to the drop area, that wasn’t going to be a good spot, because obviously it’s into the grain and it was a little bit wet,” said Woods.

“I went back to where I played it from, but I went two yards further back and I took, tried to take two yards off the shot of what I felt I hit.

“I felt that that was going to be the right decision to take off four right there. And I did, it worked out perfectly.”

Woods was left with 87 yards to the pin on his third shot and saw his ball hit the flagstick and roll backwards into the pond that fronts the green.

Under Rule 26-1, Woods had three options after retrieving his ball from the water:

Firstly, he could have played from a designated drop-area, which he chose not to do because he did not like the lie.

Secondly, he could have dropped the ball, keeping the point where it last crossed the margin of the water between the hole and the spot on which the ball would be dropped.

He chose against this option, which would have allowed him to drop on a straight line as far back as he wanted, because the ball entered the water well left of Woods’ original position on the fairway.

Finally, he could have returned to the original spot from which he played and drop the ball “as nearly as possible” to where he played his third shot.

It was this last option that Woods chose, and his admission that he did in fact move the ball two yards further back instead of dropping it on the original spot, stirred the controversy.

Woods’ fifth shot – he automatically forfeited his fourth by dropping – landed perfectly, two yards short of the pin and roll up beside the hole, after which he putted out for a bogey.

The American, who entered the tournament in red-hot form and was a strong favourite to win his 15th major, will have to produce something special to overcome this setback.

Woods is not be the first player to feel the wrath of officials this week after Chinese sensation Guan Tianlang was penalised one shot on the 17th hole on Friday for slow-play.