Mercedes’ Hamilton may have last laugh over McLaren after bright start

Lewis Hamilton's move to Mercedes may ultimately prove to be not such an unwise decision after all, writes John McDougall 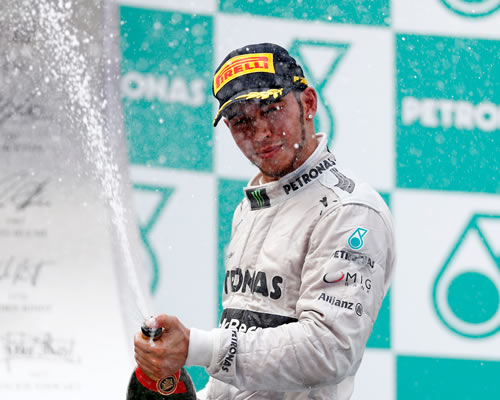 When Lewis Hamilton announced last season he was ending his 14-year association with McLaren to join rivals Mercedes, many in the paddock and beyond raised an eyebrow.

The Stevenage-born racer was leaving a team he had won 21 races with – and his only world championship title – for an outfit deemed off the pace and still finding their feet.

Mercedes’ high point last season came in China – the next race on the 2013 calendar – when Nico Rosberg finished ahead of both Hamilton and then team-mate Jenson Button.

This year – by Hamilton’s own admission – would be one of development and preparation for the 2014 championship, where new rules will radically change the sport’s dynamics.

But this picture has changed with the outcome of the first two races of this season, as Hamilton came fifth in Melbourne and third in Sepang.

After claiming his first podium with his new team after just two grands prix, Hamilton feels his Mercedes is second only to Red Bull in terms of speed.

To be fourth in the drivers’ championship and in the same position for the constructors after two races will have taken Hamilton pleasantly by surprise.

When his Mercedes move was announced last September, many saw replacing the seat vacated by the great Michael Schumacher as a backwards step compared to staying with McLaren.

It should be noted of course, that were it not for retirements from the lead in both Singapore and Abu Dhabi, Hamilton could have been a double world champion with McLaren.

This made his move all the more peculiar and open to criticism suggesting he was switching teams purely because of money or increased sponsorship deals.

Underneath these accusations though, there are some home truths that even McLaren fans cannot deny.

It is widely acknowledged he is one of – if not the – most talented drivers in the paddock and only Ferrari’s Fernando Alonso comes close in terms of pure driving ability.

Of course Hamilton, like any driver, needs to be given the tools to do the job and he plainly felt the Woking-based team could not offer him this any more.

With next year’s engine changes from a 2.4-litre V8 to a 1.6-litre turbo-charged V6 – reducing fuel consumption by a third – Hamilton felt the Silver Arrows were the more attractive option.

This is particularly true when one considers that the German team use their own engines, while McLaren had an uncertain future over their supplier when he left last year.

When Hamilton looks down the paddock to his former team, he could be forgiven for affording himself a wry smile after their first two races.

His ex-colleague Button finished a lowly ninth in Australia, while McLaren new boy Sergio Perez repeated that in Malaysia.

While Perez beds in at his new team, Button remains optimistic about how McLaren have improved in the first two races of 2013.

But they still remain behind the Mercedes duo of Hamilton and Rosberg, who must be feeling better about their title prospects following a difficult initial testing period.

Moving to Mercedes may ultimately prove to be not such an unwise decision after all by Hamilton – in fact, it could prove to be a masterstroke.

Chinese Grand Prix 2013: ‘Shanghai produces some of the best races’