Novak Djokovic is hoping to have shaken off an ankle injury in time for the Monte Carlo Masters, which starts on 13 April 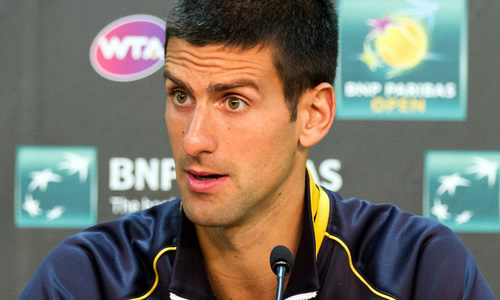 When the world No1 Novak Djokovic appeared on Serbia’s list of nominees for the Davis Cup quarter-final tie against the United States last week, the chances of the 2010 champions suddenly looked a whole lot better.

For a Serbian squad already missing its other top-10 player, Janko Tipsarevic, with injury, and facing a passionate away crowd on an indoor hard court, it was the best of news: for the United States, even with the best doubles team in the world and two top-20 singles players, it was the worst.

When Djokovic took Serbia to an early lead with a straight-sets win over John Isner, it was clear he was also in good form. He even enjoyed a 2-1 lead going into the fourth rubber against Sam Querrey after the Serbian doubles duo won a dramatic 15-13 fifth set against the Bryan brothers.

But suddenly, things looked pretty bleak for both Djokovic and Serbia. In the third game of the match, Djokovic dropped to his knees after landing awkwardly from a full-blooded forehand with twisted his ankle. He needed some intense courtside treatment, but despite clearly having trouble putting weight on his right foot, he went on to win the first set, 7-5.

He lost the second in a tie-break as he made adjustments in his tactics to protect the right leg. However as the pain-killers kicked in and the Querrey serve, the American’s biggest weapon, lost its potency due his own injury, Djokovic was able to storm through the next two sets for the loss of just one game.

He had sealed Serbia’s semi-final place in September, but it was the impact of his ankle injury on his clay-court campaign that then came into question, especially following his post-match comments: “Injuries are a part of sport, and you try to avoid as much as you can as an athlete. The nature of the injury is still to be determined.

“One hour and a half after the end of the match, all I can say now is it doesn’t look good. What’s going to happen for me next is to try to first of all to diagnose and determine the nature of the injury and how bad it is, and then see from there.”

Two days later, though, and the news looked decidedly better. His team announced on the Djokovic website: “The world’s top player has undergone an MRI examination this morning which revealed no structural damage to the joint capsule and ligaments. [He] requires therapy and strict rest in the following days. Depending on the recovery, a decision will be made on Nole’s participation at the upcoming tournament in Monte Carlo.”

On Facebook later the same day, he posted a photo of himself in therapy with the upbeat message: “After seeing the results of all the tests we did, I am really positive and strong. I’m doing the best I can with my team to recover fast and be ready for the upcoming tournaments.”

If there is one swing in the 2013 season during which Djokovic wants to be at his best, it is the one on the red dirt, and he has made no secret of the reason. The French Open is the one Grand Slam he has yet to win despite his obvious prowess on clay.

In his record-breaking 2011, after an unbeaten run through the Australian Open, Dubai, Indian Wells and Miami, he continued his winning streak onto the clay, via Belgrade, to beat the king of the red stuff, Rafael Nadal, in both the Madrid and Rome Masters. But Djokovic’s super-human effort ended in the semis of Roland Garros.

Last year, he lost out to Nadal not just in the Monte Carlo and Rome finals but also at Roland Garros—but it marked his first French Open final.

This year, with his third straight Australian title in the bag, he talked openly of his hopes for Paris this time around.

“I’m not hiding it, that’s for sure. Priority No1 is probably Roland Garros because it’s the only Slam I didn’t win. But as I said, the mindset is still very simple: take one tournament at a time.”

The first tournament in his 2013 clay campaign is again Monte Carlo, a place dear to his heart. He lives and practises there when not on the tour, and has twice reached the final.

His chief problem in the past has been Nadal, and the Spaniard will this year be aiming to win his ninth straight title on the exquisite courts overlooking the Mediterranean. And while Nadal looks like his chief problem again, Andy Murray—twice a loser to Nadal in the Monte Carlo semis—and David Ferrer—beaten by Nadal in the 2011 final—are also in contention. So the last thing Djokovic needs is any physical problem.

The incentives and the challenges, then, are great, but Djokovic has little need to take any risks.

The Monte Carlo Masters is the only one of the nine premier ATP events that is not compulsory for the top men. And if he and his team decide that he is fit to take part, Djokovic at least knows he has an extra couple of days’ respite in the schedule: The top eight men enjoy a bye to the second round of the 64-man draw.

And should he fall early, the consequent loss of points is also of no great concern: Djokovic’s top seeding is safe through to the business end of the clay season courtesy of a lead of almost 4,000 points in the rankings.

With bigger fish to fry—and the complete set of Grand Slams is a very big fish indeed—Djokovic can afford to take every necessary precaution on the road to Roland Garros.

So the slightest hint of an injury may prove very significant to his participation at any point along the way, and not just at Monte Carlo. No doubt the promoters of Madrid and Rome will also be crossing their fingers that the top name in men’s tennis will be back in top physical shape for the duration.

The main draw for the Monte Carlo Masters—which currently boasts the top 10 ranked players in the world except No3 Roger Federer—will take place at 1100BST this Saturday.

The semi-final ties of the Davis Cup are played the weekend after the US Open, 13-15 September: Serbia (home) v Canada; Czech Republic (home) v Argentina.

Heather Watson hopes to return in time for the French Open

Elena Baltacha targets British No1 spot after return from injury