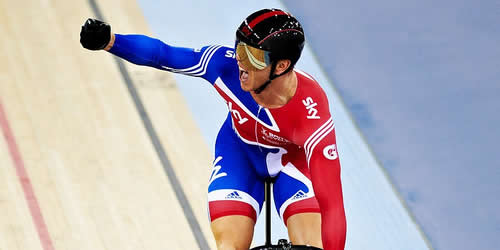 Sir Chris Hoy has brought to a halt a career spent in perpetual motion with trademark perfect timing.

Just as he nailed his charge to the line in last year’s Olympic keirin final to perfection, he assured his place in history by getting out at the very top.

Hoy’s place in the British Olympic legend had been guaranteed before those days of wonder last summer.

In Beijing, a city of ten million bicycles, none were faster than his as he became the first British Olympian for 100 years to claim three golds at one Games

But his achievements in London, defying those who claimed at 36 that time was finally on his wheel, means that in the pantheon of greats, his name is established right at the top.

Sensational is a word too often used by sports reporters, it rolls off the fingers and onto the page like legend and epic.

But Hoy’s storied achievements make them all seems a little, well, just a little understated.

Marginal gains is the still the mantra over at British Cycling, a winning formula that all now seek to imitate.

But Hoy’s career – underpinned by a work ethic that inspires those who follow him to hopefully giddier heights – hasn’t been by halves.

If winning is a habit then Hoy, with six Olympic golds and 11 world titles, is clearly a happy addict.

Last summer, as Team GB’s flag waving royal supporters watched on, the proud knight of the realm gave them, and others disbelieving of their fortunate chance to be there, an unforgettable command performance.

Just five days after joining forces with Jason Kenny and Philip Hindes to win team sprint gold, Hoy lined up in what will be his last ever big race.

Keirin racing is not the faint-hearted, there are thrills and spills and fortune favours the brave, and none are braver in the discipline than Hoy.

The pressure was on. Golds had been like buses in the previous days, and it was seen as a disappointment if an hour passed and someone, somewhere hasn’t struck up God Save the Queen and strung out the bunting.

A nation expected and he duly delivered, thundering those 27 inch thighs harder and faster than ever before, roared to victory by a crowd drunk on the emotion of an occasion that will simply never be repeated.

Hoy was now officially Britain’s most successful Olympian with six gold medals – and a silver – from four appearances dating back to Sydney in 2000.

He was embraced by five-time champion Sir Steve Redgrave just moments before he received his medal, the enormity of the moment seemingly not striking home until the anthem struck up.

“I was just trying to hold it together on the podium,” he said.

“I thought about all the days that I’ve doubted it, the races I’ve lost, the times I haven’t had form and moment I believed my career was over, all those memories came flooding back.

“It’s a very raw emotion and the pinnacle of everything you work for, it’s a realisation that you’ve made a mark in history.

“You try and compose yourself and try and take it all in but it’s just surreal. This is what I always wanted, to win gold in front of my home crowd.”

It’s never easy for a sportsman to leave the stage but Hoy – who studied mathematics at university – has done his sums.

And he has calculated that considering he’ll be 38 when the Commonwealth Games will be staged in the velodrome that bears his name in Glasgow, that numbers probably aren’t on his side.

But his contribution will continue to be felt, he has already lived up to the motto of London 2012 and inspired a new whole generation of British cyclists, most notably Jason Kenny and Laura Trott.

And don’t expect him to shrink to the sidelines either, when his signature kilo event was dropped from the 2008 Olympics he reinvented himself as a match sprinter, mastering the tactics required in a very different discipline.

Whatever is next, you can be guaranteed Hoy will continue to be at the top of his game.