Kim Clijsters, Andre Agassi and Stefan Edberg are the latest big names to voice their support for the Squash 2020 campaign 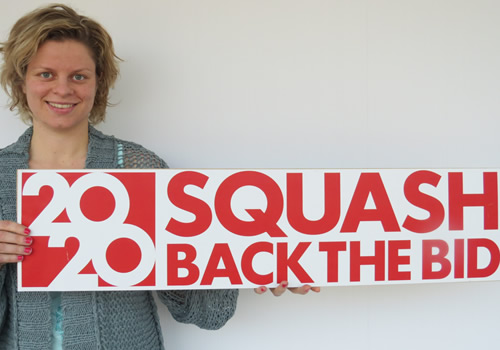 The groundswell of support for squash’s campaign to join the 2020 Olympic family got another boost this week as some of the biggest names in tennis threw their weight behind their racket-sporting colleagues.

Kim Clijsters, Andre Agassi and Stefan Edberg, who between them have won 22 Grand Slam singles and doubles titles together with five year-end championships, have followed the lead of 17-time Grand Slam champion Roger Federer, who assured squash superstar, Nicol David in Rotterdam in February that he ‘Backed the Bid’.

Clijsters, who retired from tennis at last year’s US Open and is expecting her second child this September, won 41 WTA titles along with six Grand Slam trophies. She said of squash: “I think squash would be a great addition to the Olympic Games.

“It’s a great competitive game and different from the other racket sports in not having a net dividing the players.

“It shows great intensity. With the modernisation of the game, I think it deserves a place in the Olympics.”

Andre Agassi won Olympic gold in tennis singles in 1996: “Squash is absolutely one of the best/toughest sports. The Games would be proud!” 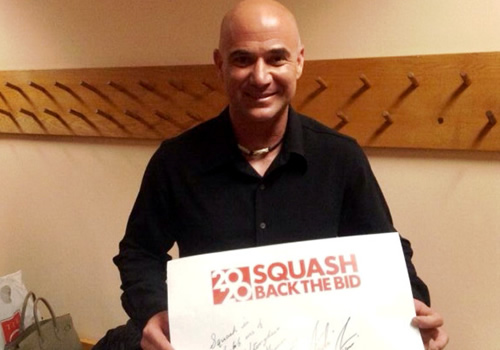 Edberg, who ended his illustrious tennis career at the final of the 1996 Davis Cup, won Olympic singles gold when tennis was a demonstration sport in 1984 and went on to win bronze in both singles and doubles when it became a full medal sport in Seoul in 1988.

He first started playing squash while he was still on the ATP Tour, and eventually joined the top Swedish league.

He is then, by several measures, ideally placed to comment: “Squash has all the credentials to be an Olympic sport: It would complement the other racket sports that are already part of the programme and it would be great to see it included in the Games.”

Edberg is not the only Grand Slam champion to have experience of squash from inside those four white walls. Federer, the first and most high-profile of the tennis fraternity to pledge his support, played with his father as a boy.

He explained, when competing in the Dubai Duty Free tournament this spring, that squash had even played a small part in his own particularly creative style of play: “Squash has been for me a very natural game. I’ve always enjoyed playing racket sports—all sports—for co-ordination. I think sometimes you can see that when I play tennis that I do play a bit of squash as well.

Needless to say, World Squash Federation president N Ramachandran has been delighted at the support squash is receiving during this vital phase in the 2020 Olympic campaign.

He said: “It is heart-warming to have tennis idols like Agassi, Federer, Edberg and Clijsters supporting squash’s campaign—and equally gratifying to see top athletes from sports like rugby, cricket, football, cycling, badminton, weightlifting, diving and shooting rallying to our cause.”

At the end of May, the eight shortlisted sports—squash, baseball/softball, climbing, karate, roller sports, wakeboard, wushu and wrestling—will each make their final presentation in St Petersburg. Those that survive the final cull, probably no more than three, will go to the IOC Session in Buenos Aires in September, where the final vote will take place.

Join the campaign on the 2020 Back the Bid website and stay close to The Sport Review for the latest.