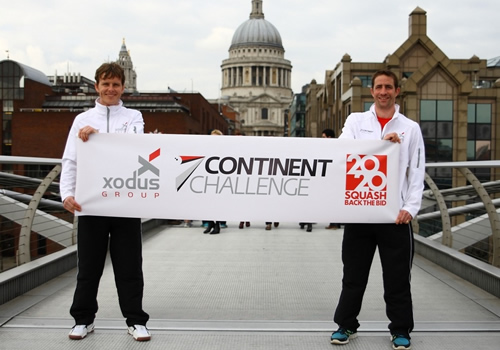 If the efforts of two particular men in London do not put squash at the top of the sporting headlines this weekend, it’s hard to know what could.

For Peter Nicol and Tim Garner are on their way to completing one of the most ambitious missions in their—or any other—sport in 2013: seven matches on each of seven consecutive days in seven different continents.

And with the Falklands for Antarctica, Santiago in Chile, Sydney in Australia, Kuala Lumpur in Asia, Egypt in Africa and now London for Europe already ticked off, they were anticipating a rare pleasure: an overnight sleep before the flight to their final destination, New York.

Their aim has been simple: to raise the status of one of the most physically demanding but visually compelling sports to Olympic status. For having failed to win entry to Rio 2016, squash is determined that 2020 will be different—that it will get the nod from the IOC when the Committee measures its worth against its competitors.

At the end of May, the eight shortlisted sports—squash, baseball/softball, climbing, karate, roller sports, wakeboard, wushu and wrestling—will each make their final presentation in St Petersburg. Those that survive the final cull, probably no more than three, will go to the IOC Session in Buenos Aires in September, where the final vote will take place.

Whatever the outcome, though, there can be no doubt that Nicol, who turned 40 earlier this month, and Garner, 43 next week, have played their part in the squash cause.

They arrived at the historic RAC building in Pall Mall to play not just one match but two. Their evening began with a charity doubles match—“quite useful because it warmed up the stiff bodies”—before joining friends and supporters for a scant half-hour before the ‘Challenge’ match got under way.

Little wonder, then, that our conversation was a little unorthodox: me sitting comfortably with two disarmingly cheerful squash players kneeling to either side. The reason was simple: They had to stretch, flex, keep warm and keep loose, or they would likely seize up before their work was done.

The two of them—Nicol a former world champion and two-time British Open champion, Garner the former world No28 and tour director for the British Squash Professionals Association—are long-standing friends, the kind of friends who can finish each other’s sentences, who seem constantly to make the other laugh. Surely such a venture, though, would challenge the best of friendships?

Garner: “You’ll have to ask him whether we’re still friends!”

They did, though, credit the ease with which they have got through the week to that same friendship.

Nicol: “We’ve survived almost better than I thought we would. I think it helps being quite relaxed and knowing each other’s games.”

Garner added: “We shared a flat, we played together for 10 years, played matches perhaps three or four hundred times.”

Not that the any of that gets in the way of the contests. I wanted to know if they had paced themselves through their marathon, perhaps trying to keep enough in hand for the latter stages.

They quickly put me right: “Unfortunately we’re not very good at that!”

Nicol, who held the world No1 ranking for 60 months, went on: “In the Falklands, it was a cold court and we went flat out for over an hour, and we looked at each afterwards and said ‘why did we do that?’ The whole point is, it’s a challenge as well as fun. We’re competitive people—and I want to win!”

Memories of his most competitive years had clearly flooded back in Kuala Lumpur. The Malaysia match was held at the Nicol David arena—David is seven-time women’s world champion—where Peter Nicol won one of his four Commonwealth golds in 1998: “I hadn’t been there for 15 years: It was really very special.”

“In Chile, the club held maybe 60-70 people, but there was so much interest, they took windows out of the wall behind the glass-backed court, built seating in the car-park, put a roof over it and fitted in 170 people…In Santiago, for example, it’s something they see once or twice a year: I think it was probably the place where they were most excited and energetic to see us.”

In Australia, they made one particular spectator very happy. Responding to the blog that Nicol and Garner have been writing through their travels, she wrote: “To most of us in the house at Willoughby [Club in Sydney], heights were reached when two of our local eight-year-old pips scootched into the court during game breaks to play a few points with each other out of sheer inspiration (acting out what we were ALL feeling—‘I want to get up and go try what I saw right now!).

“But when the big boys returned to court, they spontaneously had each kid remain and play out a point. Little Tom actually took his with a fast, low forehand to notch one up for the locals. We all shared a tablespoon of magic together last night, and that’s a lasting nourishment.”

In London, Garner levelled the series at 3-3 to guarantee the duo’s New York finale has everything to play for—so after a question-and-answer session on the court, and photos sessions in the bar, they were off for those precious hours of rest before the final push.

I wondered if the mental pressure—lack of sleep and coping with endless changes of time-zones—might have proved an even greater enemy than the physical pressure and, briefly, reality surfaced.

Garner: “Tonight, we might get five or six hours sleep. Last night I got about three, and he didn’t really sleep at all.”

Nicol: One of those situations where the body doesn’t seem to know where it is.”

Garner: “We’re not really going through jet lag because we’re always going on somewhere else…”

Nicol: “I find the mental side sometimes difficult because I don’t like being away from home as much as I used to. Because I travelled a lot in my life…” He paused: “My partner is four months pregnant—I’m a bit of a softie now.”

Now, though, they were being summoned, and the smiles and banter snap back into place. Their parting shot was: “Are you going to stay and see the match?”

As if I would miss it. The squash was fast and furious, intense and exhausting. Nicol, showing perhaps that absence of sleep since leaving Cairo, began to look the more drained and Garner—yes, they remain intensely competitive—pressed home his advantage. And still they smiled.

No, I wouldn’t have missed it for the world. And let’s hope the world doesn’t miss out on squash in 2020.

As well as raising awareness for the Squash 2020 campaign, the Xodus 7-Continent Challenge is also raising money for two charities. The Natasha Drake Trust helps a young squash player rebuild her life after a debilitating illness, and LV-SOS Kit Aid helps give disadvantaged people from around the globe the opportunity to play and enjoy squash. Donations can be made via the Challenge website.

Ex-England captain Andrew Strauss: Injuries will be a big factor in Ashes