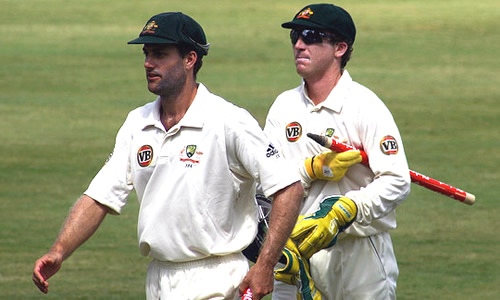 Michael Clarke will once again skipper the side, while Haddin will take over the vice-captaincy role from Shane Watson after the all-rounder relinquished the role following a difficult tour of India.

There is just one uncapped player included in the squad, with James Faulkner selected ahead of left-arm bowler Mitchell Johnson, while just five of the travelling party have played in England before.

The Aussies suffered a 4-0 whitewash at the hands of India earlier this year, which has left the inexperienced side reeling but Clarke is confident that the selected 16-man party has enough talent to compete with England.

“When you don’t perform people criticise you. Every single player in this squad has a lot of hunger, we know how important the series is and we know we let ourselves and the Australian public down by the way we perform in India,” said Clarke.

“We’ve got a lot of work to do. We have time to do that. Our goal playing for Australia every time going out on the field is win every game you play. This tour will be no different.

“We will always pay our respects to the English team. They’re a very strong team playing in their own backyard where they’re even stronger – there’s no doubt about that. But with this squad we have the talent, the experience and the youth to go over there and have success.”

After receiving an international recall, Middlesex batsman Rogers admitted he was shocked to be included despite plenty of speculation.

“I am delighted and honoured to be given another chance to represent Australia,” he told BBC Sport. “I thought the chance might have passed me by, but I never gave up hope or the desire to be part of a successful Australian Ashes side.”

After having been so prolific in the domestic county game – scoring over 1,000 first-class runs in each of the last five County Championship seasons – Middlesex have been aware for some time of the possibility of Rogers’ international selection and have a number of contingent options already in place.