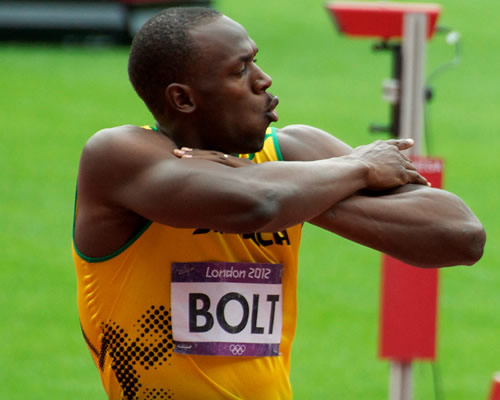 Usain Bolt will compete in the London 2012 Anniversary Games along with 28 other Olympic medallists at the Olympic Stadium from 26 to 28 July, it has been confirmed.

Bolt, who will run the 100m and in the 4x100m, is among 29 Olympic medallists, including 12 champions and four world record holders confirmed for this summer’s event.

The 26-year-old, who repeated his Olympic treble winning feat from Beijing at last summer’s London 2012 Games, is excited by the prospect of returning to the stadium where he won three gold medals in the 100m, 200m and as a part of the world-record breaking 4x100m Jamaican relay team.

“I’m looking forward to coming back to the UK, especially with it being a year since winning three gold medals in the Olympic Stadium,” said Bolt.

“The crowd were amazing at the Games, and I hope they will be out again in their numbers at the end of July.

“I haven’t competed at the London Diamond League since 2009 but it has always been a great meet with lots of Jamaican support – it almost feels like running at home.”

Joining Bolt in the 100m is 2003 World Champion Kim Collins, who missed out on competing at his fifth Olympic Games last year.

Despite being 11 years older than the 100m and 200m world record holder, Collins is determined to prove that he can still mix it with the best sprinters in the world.

“My story from London was well documented, and to have the opportunity a year on to run in the Stadium, is something that I’m really grateful for,” he said.

“The support I get from the British crowds every year is incredible and I’m looking forward to hearing that roar when I come out on to the track in July.

“This is my Olympic final, and I’m going to take full advantage of the occasion and show that even at 37, I’m still a force to be reckoned with.”