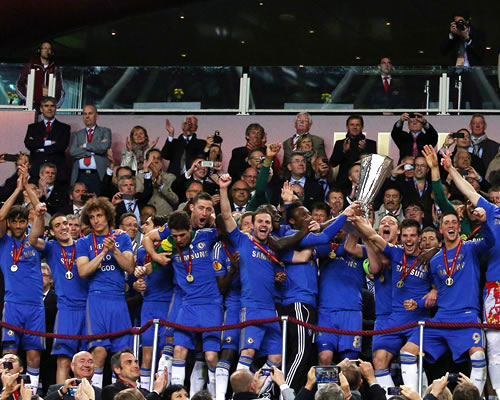 Ashley Cole could not hide his delight after helping Chelsea end a “tough” season on a high by lifting the Europa League trophy.

A stoppage-time winner from Branislav Ivanovic wrapped up a 2-1 win over Benfica in Wednesday’s showpiece in Amsterdam after Óscar Cardozo’s penalty cancelled out Fernando Torres’ opener.

The win comes after Chelsea sealed a top-four finish and booked their place in next season’s Champions League with victory at Aston Villa at the weekend.

And 32-year-old left-back Cole was delighted to have helped the Blues lift another European trophy after their Champions League triumph last season.

“It was amazing to win the Champions League last season and come back strong and win something again this year,” said Cole.

“It isn’t the Champions League but to win something in Europe is a brilliant achievement and we’re very proud of that achievement.

“It’s been a tough season. It’s been disappointing at times but we’re definitely in the top four, maybe the top three and we have a European trophy.

“There are a lot of Premier League sides that would love to do that, and for us to do it is brilliant.”