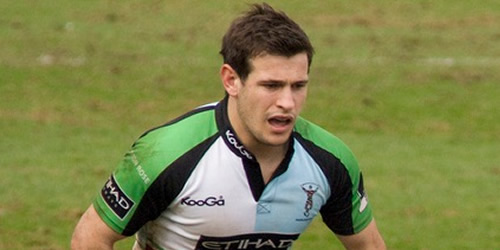 Danny Care impressed for Harlequins against the Saints Photo: A Welsher/Flickr

In the wake of Warren Gatland’s British and Irish Lions squad announcement, it was perhaps surprising that there weren’t more of the touring party on show in this fixture. Not one of Harlequins championship winning squad will be represented and only Northampton Saints skipper Dylan Hartley was chosen – and even his selection baffled some as he had lost his England spot to Leicester’s Tommy Youngs. With third place riding on the outcome and a few egos looking to prove Gatland wrong, it was Quins scrum-half Danny Care who stole the show with a sharp, incisive display that highlighted exactly what the Lions will miss as his side were 22-19 winners. While he may not be first-choice, Care has played at a consistently higher level than Munster’s Conor Murray, who took the third scrum-half spot over him. Care set up two tries, although the first was the direct result of a Saints’ defensive mistake as full-back Ben Foden dived over a chip through, allowing winger Tom Williams to go over untouched. The second was typical Care as he took a quick tap penalty and Quins kept up the pressure to send Tom Casson over after good work by Rob Buchanan and George Lowe. However, they didn’t have it all their own way as Northampton showed their attacking invention, using bruising inside-centre Luther Burrell, who showed his game isn’t all about power with some deft off-loads and quick feet, with Foden’s ability to create something from nothing. Both set up two of the Saints’ three tries. Quins now face Leicester while Northampton travel to Saracens, and while both sides concede home advantage, if they can cut out the individual errors that have plagued them in recent weeks, this could easily be a Premiership final rematch in a few weeks’ time.

Leicester showed their professionalism as they overpowered a spirited London Irish side 32-20. While their director of rugby Richard Cockerill would have been sorely tempted to rest his bigger names in a bid to keep them fresh for the play-offs, he opted to maintain their momentum and was rewarded with some stellar individual performances. In particular, two of his Lions, Tom Croft and Ben Youngs showed their touring quality as both scored first-half tries. Croft’s contribution in the hour he was on the pitch suggested he could be nearing the 2009 form that made him such a threat on the last Lions tour. Youngs also showed his quality as his wonderful dummy fooled the Irish defence and allowed him to run over unopposed. The victory secured a home semi-final berth and they will now face defending champions Quins, a side they have lost to twice this season. Cockerill is smart enough to know that home advantage can count for nothing if Quins get off to a fast start and will be guarding against complacency next weekend. For Irish, the fixture felt like the end of season meaningless encounter it was. They had nothing but pride to play for and initially it infected their game as they lacked any sort of urgency. However, in the second half they appeared to spark to life with a try for the departing prop, Alex Corbisiero and two long range efforts from wingers Topsy Ojo and Marland Yarde. By then it was too little too late but they will head into next season determined to put this year’s relegation battle behind them.

Exeter and Gloucester serve up a thriller

Much has been said about the pros of moving the rugby season to the summer months in the elusive search for spectacular, running rugby. While that may not happen in the near future, the advocates now have a new champion in the DVD of this game. This wasn’t just an ordinary West Country derby, with Exeter needing a win to secure Heineken Cup rugby next year and Gloucester doing their best to deny them. It was the boot of Exeter’s exiled Irishman Gareth Steenson that secured European rugby for the Chiefs as he notched a last-minute penalty to give them a 40-39 win. Steenson’s boot was the Chiefs’ main weapon as he scored 25 points but the game was more notable for the mistakes made by both sides that allowed such a high-scoring outcome. Exeter started brightly with a gung-ho approach that resulted in two tries in the first 15 minutes but then they threw that away with a series of costly mistakes. Three times they lost possession with dropped passes, and three times they were punished as Gloucester took advantage of their generous nature. The game ebbed and flowed with both sides taking turns with the lead but it was Gloucester who gifted Exeter the points with centre Billy Twelvetrees making a mess of a clearing kick that resulted in an Exeter penalty and Steenson’s season defining moment.

Sarries grind out win over Bath

Following the disappointment of their Heineken Cup semi-final loss to Toulon last week, it was important that Saracens returned back to form at the business end of the domestic season. That was duly achieved as they ground out a 23-14 win over Bath in what was a fairly subdued Allianz Park, despite Sarries ensuring they remained unbeaten at home domestically this season. It was a fairly routine win with an eye-catching performance from surprise Lion prop Mako Vunipola, whose power in the loose was underlined with a superbly finished try. Credit must go to the Saracens coaching staff who have worked hard on making him a more explosive player and conditioned him to use his bulk more effectively, and his Lions call up was a just reward for the endeavours. Sarries never looked likely to lose as Bath seemed resigned to their fate. Providing Exeter lost, they had an opportunity to secure a Heineken Cup spot for next year but they missed out as they just didn’t challenge enough. They scored two tries, one from Rob Webber when Saracens were down to 14 men and one from Horacio Agulla who showed great strength to beat five defenders and go over. If his team-mates showed the same heart and desire then they may have had a better end to a disappointing season. However, with signings in the shape of Jonathan Joseph and George Ford Bath have signalled an intent to challenge for the Europe again next year.