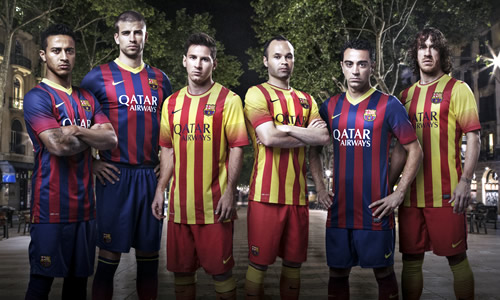 Barcelona have unveiled their new home and away kits for the 2013-14 season.

The traditional Barcelona red and blue stripes return to the new home shirt with a modern graphic fade stripe featured on the sleeves.

The new home shorts are blue, and the socks feature a thin yellow stripe at the top and a graphic red-and-blue stripe repeated from the sleeves.

The home jersey also features a yellow V-neck collar to represent the Catalan flag, the Senyera, which is also fully integrated in to the back of the collar.

And for the first time, the Catalan giants will play in an away kit featuring the red and yellow of the Catalan flag — the Senyera — as the club’s traditional stripes.

The new away shorts are red, and the new away socks feature a thin red stripe at the top and the same yellow and red fade stripe from the sleeves fully engineered into the sock.

‘Liverpool’s Carragher as good as Italy greats Cannavaro and Nesta’