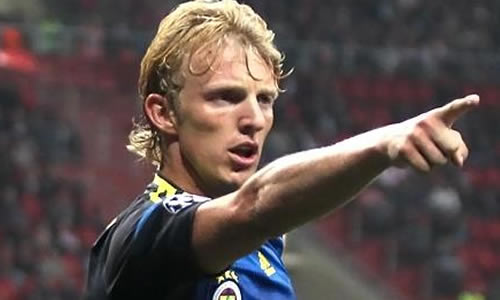 Dirk Kuyt admits it would be “very special” to line up against Rafael Benítez’s Chelsea in the Europa League final with Fenerbahce.

The Dutchman was brought to Liverpool by Benítez in 2006, with the forward going on to make 208 Premier League appearances for the Reds before leaving Merseyside for Turkey last summer.

And the 32-year-old was full of praise for the Spanish coach ahead of a potential showdown with his Blues side in Amsterdam later this month.

“It would be very special to face Rafa in the final,” Kuyt told the Daily Mirror. “He signed me for Liverpool and has been a very big ­influence on my career. I will always be grateful to him for giving me the chance at Anfield.

“He means a lot to me. He is one of the best managers I have ever worked with and clearly one of the best in Europe. The things he wrote about me when he heard I was leaving Liverpool were very special and important to me.

“I will never forget that. I owe him a great deal but I would still love to beat him if we both make it to the final.

“I know from my experience with Liverpool that anything is possible. We’ve got a huge game in Benfica and it’s hard to look beyond that. But, like I say, if it did turn out that way it would be special.”

Chelsea lead Basel 2-1 from the first leg of their Europa League semi-final, while Fenerbahce are 1-0 up against Benfica ahead of Thursday’s return legs.

It’s not my fault! Neil Warnock defends his signings at QPR