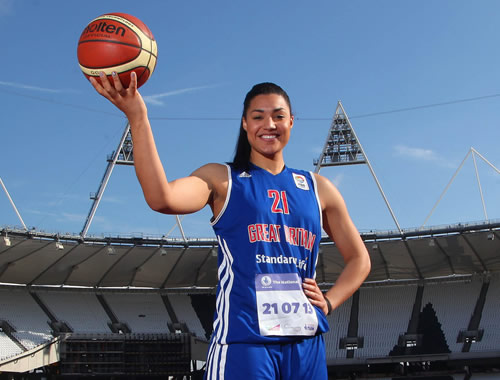 Dominique Allen says it is full-steam ahead towards Brazil Photo: Handout

Dominique Allen insists the furore surrounding British Basketball’s funding has done nothing to douse the flames of desire within her to compete at the Rio 2016 Olympics.

The 23-year-old was a part of the first ever Great Britain women’s basketball team to compete at an Olympics at London 2012 last summer.

However there was little to cheer as Allen and co failed to win any of their five games, while the men’s side managed just one victory.

Following the Games British Basketball was told by UK Sport that it would receive no funding, having previously been handed £8.6m for London 2012, only to be awarded £7m after an appeal.

But despite the rollercoaster ride her and her team-mates have been on, Allen is adamant it is now full-steam ahead towards Brazil.

“We have the EuroBasket in June in France so preparation will start for that and I am really looking forward to getting back to it,” said Allen, who will return to the Olympic Park for the first time since last summer’s Games on Sunday 21 July for the National Lottery Anniversary Run.

“The aim now is to qualify for Rio in 2016 and the EuroBasket will play a part of that and everyone is determined to get to Brazil.

“Preparation has been a bit up and down with all the funding issues but it is great that we have got our funding back.

“And while it never stopped the players from pushing forward the funding obviously helps and I believe we are now back on track for Rio in 2016.”

It has been all change for Allen once the dust settled on London 2012 as she upped sticks to play for Meccanica Nova Bologna in Italy.

Centre Allen helped her new side finish eighth in the South A2 League standings and is convinced the move abroad will only help her improve.

“I took a month off and went to America for a little bit but I have just finished my first full season over in Italy,” she added.

“It was very different in Italy as no one spoke English to me, I had an Italian coach and it was difficult to begin with.

“But it was a really good experience for me and I think it has and will help my become a better player.”

The National Lottery Anniversary Run will take place on Sunday July 21. Places are available via www.nationallotteryrun.com