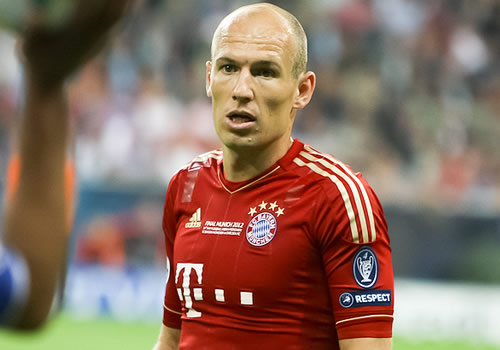 Arjen Robben popped up to score an 89th-minute winner as Bayern Munich beat Borussia Dortmund 2-1 winners to win the Champions League at Wembley.

Dortmund levelled through Ilkay Gundogan’s confidently-taken penalty but Franck Ribery and Robben combined to unlock the opposition defence at the death and secure a fifth European cup for Bayern.

Here is a selection of our favourite tweets from the professionals, both past and present and in chronological, after a breathtaking Champions League final in London.

Even American tennis ace John Isner (‏@JohnIsner) is tuned in: “I don’t know much about soccer, but this goalie for Bayern is legit. However, I’m pulling for the yellow team.”

Former Ireland midfielder Matt Holland (‏@mattholland8) sums up the opening period: “The two keepers have been superb so far!!”

Liverpool goalkeeper Brad Jones ‏(@Brad_Jones1) sees the funny side of having two German sides in the final: “If this goes to penalties the German team will win 100%… #championsleaguefinal #greatbet”

Everton’s Phil Neville (‏@fizzer18) reckons Dortmund need to be more clinical: “Really good first half – feel Dortmund needed to take their chances – FCB look like they have more match-winners as game goes on!”

Manchester United defender Mikael Silvestre ‏(@IamMSilvestre) is thrilled to see the score level: “Dortmund back on track ! Total Fussball is paying off! #UCLfinal”

Swansea’s Wayne Routledge ‏(@WayneRoutledge) is gutted for Dortmund as Robben scores the winner: “Heartbreak simple as…”

But England legend Gary Lineker (‏@GaryLineker) is happy: “Thank you Robben. I don’t care who wins but I’ve got a ticket for the Froch fight and extra-time would have scuppered me. #selfish”

Marseille midfielder Joey Barton ‏(@Joey7Barton) feels Klopp’s men deserved to win: “Dortmund have been the best side for majority of this match. Gutted for them. Hummels has had a stinker tonight.”

Newcastle goalkeeper Tim Krul (‏@TimKrul) also hails his Dutch team-mate: “Winning goal by Robben .. Last year he was booed by his own fans now he’s the hero. So pleased for him #championsleaguewinner”

Milan midfielder Kevin-Prince Boateng (‏@KPBofficial) is delighted for his half-brother: “Jaaaaaaaa siiiiiii yesssssss @JB17Official so so proud!!!!!! Congrats form @sattamelissa and me. But even proud of #klopp and all BVB09…respect!!!”

Dutch legend Ruud Gullit ‏(@GullitR) credits both sides: “Brave @bvb. @Bayernmunchen was the to end half better and fitter. Compliments to @bayernmunchen…”

Barcelona defender Gerard Pique (‏@3gerardpique) is a big admirer of Dortmund: “I’m a fan of Jürgen Klopp and his team. It’s a joy to watch them play. Great players with a big future.”

And finally, Javier Mascherano ‏(@Mascherano) praises Bayern: “Big prize to Bayern Munich after having lost two finals in the last three years followed believing in its style and its possibilities.”