England v New Zealand: Pace bowlers Stuart Broad and Steven Finn are ruled out of the first two ODIs against the Black Caps 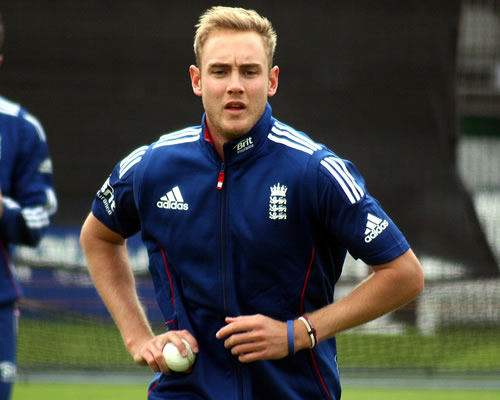 Stuart Broad in action in the nets at Lord's on Thursday Photo: The Sport Review

England will be without injured Stuart Broad and Steven Finn for the first two one-day internationals in the three-match series against New Zealand.

The pair were rumoured to be suffering from niggles after the Test series’ conclusion on Monday, but it was confirmed that both need rest ahead of next week’s Champions Trophy.

The absence of Broad (bruised knee) and Finn (shin) means England captain Alastair Cook will be without his first-choice attack in the build-up to the event.

England are desperate to win the month-long tournament having never won an ICC 50-over event in their history.

England later confirmed that Warwickshire pace bowler Boyd Rankin had been added to the squad for the remaining ODI matches.

Rankin made his England Lions debut in 2011 against Sri Lanka A and was selected on the England Performance Programme later that same year.

The 28-year-old played 37 ODIs for Ireland before retiring from Irish cricket earlier this year to focus on his cricketing ambitions with Warwickshire and England.

Meanwhile, New Zealand selected Nathan McCullum ahead of injured Daniel Vettori, who had been hoping to make his much-anticipated return after an achilles problem.