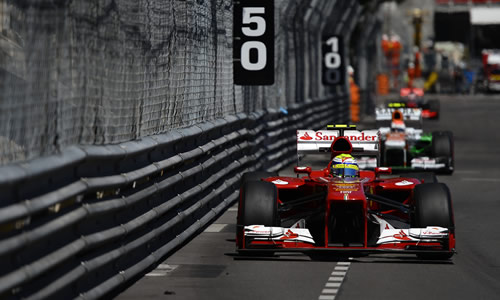 Ferrari’s Felipe Massa has been sent to hospital for check-ups after crashing into the barriers at Sainte Devote in the Monaco Grand Prix.

In a carbon-copy of Saturday’s crash, the Brazilian’s front wheels seemed to lock up on lap 30 before he went side-on into the barriers on Turn One.

Massa had earlier complained of an immovable, stiff neck after the Saturday crash, so has been taken to hospital as a precaution after his latest collision

The Ferrari driver was able to exit the car and was seen sitting on the barrier but was wearing a neck brace and looked to be in some discomfort.

The Italian team released an update on their driver’s condition soon after the crash, saying: “Massa is alright, currently undergoing some check-ups.”

Massa’s crash brought the safety car out for eight laps before the race was stopped in lap 46 following a Pastor Maldonado crash which forced the barriers onto the track.

The race was delayed for a quarter hour before continuing once again under the safety car, with Mercedes’ Rosberg in the lead.