From Rome to Squash 2020, Roger Federer sends his very best

Roger Federer once again throws his weight behind the Squash 2020 campaign. Marianne Bevis reports from Rome 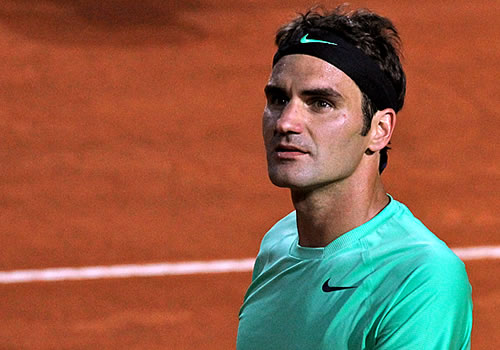 Roger Federer is in action at the Rome Masters this week Photo: Marianne Bevis

With just a week to go until squash makes its final presentation to the International Olympic Committee, Roger Federer has once again thrown his weight behind the campaign of what he calls “this lovely sport”.

It was in Rotterdam in February that seven-time world squash champion, Nicol David, recruited the most influential name in tennis to squash’s 2020 bid, and since then, many more from squash’s larger sibling have rallied to the cause.

In April, the 17-time Grand Slam champion Federer was joined by Kim Clijsters, Andre Agassi and Stefan Edberg, who between them have won 22 Grand Slam singles and doubles titles along with five year-end championships.

Then came contemporary champions: Caroline Wozniacki has won 20 professional titles and held the No1 ranking for over a year; Andy Murray is No2 in the world rankings, a Grand Slam champion and owner of 26 titles—along with two Olympics medals in London 2012, gold in singles and silver in mixed doubles.

Federer, too, placed huge importance on winning an Olympic medal last year. Already with a doubles gold in 2008, he took singles silver to Murray’s gold in London.

In Rome, where he currently aiming to win one of the few Masters titles to elude him, he talked of the impact of Olympic participation for tennis, and how important it would be for squash to have the same exposure.

“The Olympics is clearly a place where the ‘Olympics spirit’ is very important—the movement, and all the sports coming together on the same stage. To be part of so many sports at such a big event is, I think, a big benefit for tennis,” Federer told our chief tennis writer Marianne Bevis in Rome.

“We can showcase to a live audience, also on TV or live in a stadium. And I think maybe people who had never gone to see tennis, but now because they’ve gotten a ticket in the raffle, that spreads the word that actually it’s a great sport—not just on TV or in the live stadium.

“So that worked well for tennis and then I think the same thing goes for squash. It’s an incredible platform and a stage to showcase the talents of each individual.”

Federer used to play squash himself, often with his father, but had to put his involvement on hold once tennis took off for fear of injury. But clearly his personal experience nurtured a love and an appreciation for the sport.

“I think it’s a lovely sport,” he continued. “I played it when I was younger, and although it’s a bit different to tennis in some ways, it’s still very similar and very exciting.

“It’s obviously evolved with the technology over the last 10, 20 years as well. I grew up with a wooden squash racket, for example!

“But I mean, it’s a brutal sport physically and very tough mentally, too, you know. Unfortunately in the past maybe they didn’t get a big opportunity… but I think maybe through being part of the Olympic movement, it could grow in a big way.”

Federer is not alone in picking up on the physical intensity of tennis’s fellow racket sport. Agassi, a gold medallist in 1996, commented: “Squash is absolutely one of the best/toughest sports. The Games would be proud!”

Edberg, who won Olympic singles gold when tennis was a demonstration sport in 1984 and went on to win bronze in both singles and doubles when it became a full medal sport in Seoul in 1988, returned to squash after retiring from tennis: “Squash has all the credentials to be an Olympic sport.

“It would complement the other racket sports that are already part of the programme and it would be great to see it included in the Games.”

Certainly Federer has no doubts that squash should be in. “When I did hear some time ago that squash has never been in there, I was like, how come badminton’s in there, ping-pong is in there, tennis is in there and squash isn’t? It makes total sense for the racket sports to be complete, so I wish them the best for their bid.”

No doubt he—by then in Paris to begin his French Open campaign—along with the rest of the squash-loving world, will be watching developments in St Petersburg next week with keen interest.

There, the Olympic Committee (IOC) will consider the final presentations from the eight shortlisted sports—squash, baseball/softball, climbing, karate, roller sports, wakeboard, wushu and wrestling—and is expected to recommend two or three of them to the IOC members meeting in Buenos Aires in September where the final vote will be made.

Join Federer in supporting the campaign on the 2020 Back the Bid website and stay close to The Sport Review for more about the bid.