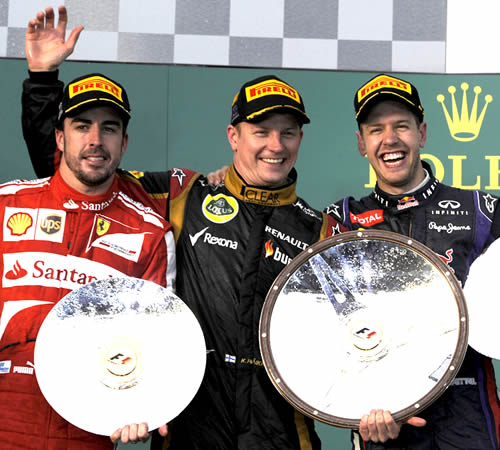 After four rounds of the 2013 Formula 1 world championship, the usual suspects seem to have taken their places at the helm of the drivers’ leaderboard.

Current world champion Sebastian Vettel – perhaps unsurprisingly – leads the standings with two race wins in Malaysia and most recently with a dominant drive in Bahrain.

Surprisingly, Lewis Hamilton sits in the top three after bedding in well at new team Mercedes, with his new car more competitive than the Brackley-based outfit first realised.

Despite Hamilton’s belief that his team are just hanging on to the likes of Red Bull, two back-to-back third places in Malaysia and China suggest otherwise.

Fernando Alonso – arguably the biggest threat to Vettel’s title going into this season – meanwhile sits 30 points from the summit of the drivers’ championship.

But regardless of weekends to forget in both Malaysia and Bahrain through mechanical failures, the Spaniard’s sheer talent still makes him a force to be reckoned with.

McLaren – perennial challengers in both the drivers’ and constructors’ championships – have fallen behind the likes of Ferrari and Red Bull with a rather uncompetitive car.

Mexican rookie Sergio Perez is still finding his feet at his new team and Jenson Button is relying on strategy rather than speed to get the best out of the MP4-28.

One driver that has perhaps gone under the radar somewhat – ironic given he is currently Vettel’s nearest challenger – is Lotus’ Kimi Raikkonen.

An old saying in motorsport reads ‘if you want to win, hire a Finn’ – and Lotus team principal Eric Boullier can certainly back that after offering Raikkonen a seat last season.

To some the Finn is a bit of a hothead, with a cold and calculated style to his driving and many often question if he actually enjoys his job.

He rarely smiles when he succeeds and seems emotionless regardless of race circumstances, such is his strong focus and work ethic.

Not even his own team are safe from rebuke, as was proved in his sole win last season in Abu Dhabi, telling them to leave him alone while securing victory.

But his results speak for themselves – Raikkonen is a world champion and is Vettel’s closest challenger in the drivers’ championship so far this season.

The Lotus E21 is among one of – if not the – most improved cars on the grid this season and is machinery being cleverly exploited by the 33-year-old.

The car may not be the quickest in qualifying, but has been has consistent as any when it comes to race day in Raikkonen’s hands.

The situation at the Enstone-based team suits Raikkonen well, the Finn comfortably being the team’s number one driver ahead of erratic Frenchman Romain Grosjean.

After Vettel, Raikkonen has been the most consistent driver in the field this season, winning the first race in Australia and securing back-to-back second places in China and Bahrain.

The Lotus was among the most impressive in pre-season testing and has kept that momentum going in the early stages of 2013.

Since returning to the sport last year following a two-year spell in rallying, Raikkonen looks rejuvenated and ready to add to his sole world championship won in 2007.

The likes of Alonso and Vettel are the ones grabbing the headlines, but Raikkonen is the dark horse on the grid that one would be foolish to bet against.