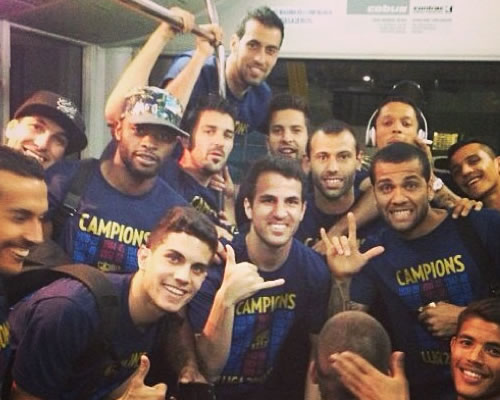 Barça awarded the title without kicking a ball

The La Liga title has been effectively wrapped up for months now but on Saturday the time came when Barcelona could officially be named as Spanish champions for the 22nd time. Real Madrid needed to beat Espanyol to stall Barça’s title celebrations but could only manage a 1-1 draw in Catalonia. This meant Barcelona had reclaimed the title prior to their game with Atletico Madrid at the weekend and Tito Vilanova had a first league championship as manager. Despite falling behind in Madrid, Barcelona fought back despite losing Lionel Messi to injury and, thanks to Alexis Sánchez and a Gabi own goal, turned the game around. Barcelona can reach the 100-point mark if they win all three of their remaining games but that will not change what feels like quite an underwhelming season.

At the beginning of the season, Barça ripped apart the competition, going unbeaten in the league for 19 games up until January but since then the club has faced a stark reality check. Being humbled by Bayern Munich signalled the end of their European domination but in truth things had been sour for a while before that Champions League semi-final. Messi was scoring for fun in a marathon run of consecutive games but nobody looked like they could chip in when he was injured. David Villa, Sánchez and Cesc Fàbregas all struggled to match Messi’s impact this season and the defence has been massacred by injuries and lacklustre replacements. The scintillating football has been missing for a while, recently discovered in the Bundesliga where Barcelona’s sense of invincibility has also relocated to. Stern opposition in Europe has made the club feel vulnerable for the first time in years as a summer of spending must commence for Barça to return to the summit of world football.

“I deny here and now being the new coach of Manchester City, I haven’t signed an agreement with anybody,” were the words of current Malaga coach Manuel Pellegrini following the barrage of rumours to hit Eastlands and Andalucía over the weekend. Pellegrini has been linked with the City job for weeks since director Txiki Begiristan and the Chilean manager’s agent were spotted dining in Madrid, and those rumours have only strengthened following City’s shock defeat by Wigan in the FA Cup final on Saturday. But Pellegrini maintains he has not signed anything prior to Malaga’s final two La Liga matches. With the future of the south coast side becoming more concerning as pre-season approaches, Pellegrini has hinted in the past that he doesn’t know what will happen in the summer. On a side note, Malaga’s appeal against their European ban will take place tomorrow.

The Copa del Rey final takes place this Saturday between Madrid’s two premier sides but neither will go into the game with any considerable momentum. Real Madrid could only muster a 1-1 draw away to Espanyol at the weekend, resting Xabi Alonso, Karim Benzema and Cristiano Ronaldo as they gear up for the massive derby game. The squad has been damaged by a public row between some of the players and Jose Mourinho, as he reportedly prepares to leave Spain with one last trophy in his collection. On the other hand, Atletico lost to Barcelona but should have at least claimed a point from the game after conceding two late strikes to the Spanish champions. Diego Simeone will be looking for anything to give his side the advantage as they look for a first win over Real in 13 years.