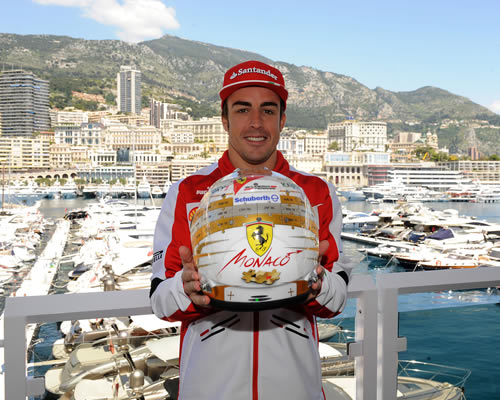 Fernando Alonso in Monaco ahead of Sunday's race Photo: Ferrari

Fernando Alonso is wary of the threat posed by Mercedes duo Lewis Hamilton and Nico Rosberg at this weekend’s Monaco Grand Prix.

Neither Mercedes driver has won a race this season but Hamilton only trails Alonso by 22 points and is in fourth place behind the Spaniard in the drivers’ standings.

And Alonso believes that Mercedes’ previous history at the street circuit points to the Brackley-based team being a force to be reckoned with this weekend.

“We know that we have a competitive package with both cars on the podium in Barcelona and we know that Monaco is a very unique track and you need a good set-up and confidence to drive here,” Alonso said.

“But we also know Mercedes will be strong, they have been on pole position for the last three grands prix, so we have to expect them to be very strong here again.

“They were on pole here last year with Michael [Schumacher] but had a penalty. We know how difficult it is to overtake and if they are on pole position maybe they are favourites here, but we must not forget our main target is the championship and Vettel and Raikkonen are ahead of us.

“If Mercedes has to win one race then this is the one and we will just concentrate on finishing in front of the others.”