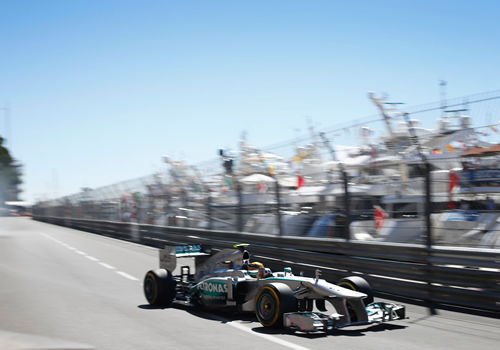 Nico Rosberg capitalised on the slippery conditions to claim one of Formula 1’s most prized pole positions and lead from the front in the 60th Monaco Grand Prix.

Thirty years on from his dad winning in Monaco, the German posted an impressive lap to continue what has so far been a superb weekend for Mercedes.

Rosberg was fastest in all three practice sessions and piped team-mate Lewis Hamilton to pole to confirm a Mercedes one-two.

Red Bull’s Sebastian Vettel appeared last on track in the final session but the defending world champion could not top the Mercedes and qualified in third.

The wet corners threatened to cause problems for the first time since 1988, when drivers were last forced to qualify as rain fell in Monte Carlo during qualifying.

The surprise package was Toro Rosso’s Jean-Eric Vergne, who made it into Q3 for the first time in his career and starts from 10th.

Lotus’ Romain Grosjean posted a promising lap to make it through Q1 but failed to break into the top ten and qualified in 13th.

It was a similar story for Pastor Maldonado as the drivers battled to get an uninterrupted lap, with the Venezuelan dropping to 16th in his Williams.

Giedo van der Garde had his best qualifying session of the campaign so far and his Caterham starts from 15th on the grid.

It was a terrible start to the session for Marussia’s Jules Bianchi as a mechanical problem meant the Frenchman had to withdraw from Q1.

Force India’s race engineer apologised to Paul Di Resta over the team over the radio as the Scot was also eliminated in Q1, placing 17th.

Following a 180mph-crash into the barriers at the Sainte Devote corner in practice it was always going to be a race against time to repair Felipe Massa’s gearbox.

Massa faced a five place grid penalty for the crash, but Ferrari’s efforts to give the Brazilian a decent shot came in vain and he starts from the back of the grid.