Monaco Grand Prix 2013: Mercedes Nico Rosberg leads from pole to flag to win a dramatic race at the street circuit 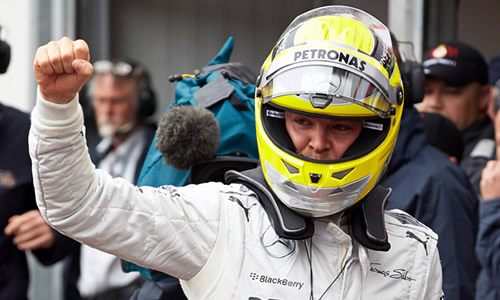 It was a case of third time lucky at the Monaco Grand Prix as Nico Rosberg finally held onto a qualifying pole to take victory in a dramatic race.

The German had taken pole in the last two races but failed to capitalise, yet managed to lead from start to finish to grab Mercedes’ first victory of the season.

The opening few laps of the Grand Prix were a cagey affair, with 12 seconds between 10th and first, allowing the Silver Arrows to consolidate their one-two grid position.

Yet the race sputtered into life in lap six as McLaren’s Sergio Perez shut out team-mate Jenson Button as he attempted to pass him for sixth, prompting a furious Button to complain.

And in lap nine Caterham’s Charles Pic had to flee his car after his engine set ablaze, bringing out the yellow flags and the fire extinguishers.

But it was lap 30 in which the race really began to shape up dramatically as Ferrari’s Felipe Massa suffered a two-wheel lock-up, ploughing into the turn one barrier.

With the Brazilian rushed to hospital the safety car to undergo tests the safety car made its first appearance of the season, staying out for eight laps.

The main casualty of the enforced slowdown was Mercedes’ Hamilton as a poor pit strategy forced him to slip back behind the Red Bulls into fourth.

And the racing had barely restarted when Caterham’s Max Chilton collided with Williams’ Pastor Maldonado, the Venezuelan’s crash putting the barriers onto the track and forcing a red flag stop.

And in the ensuing quarter-hour lull the FIA ordered Ferrari’s Fernando Alonso to give up sixth place to Perez after he cut the chicane to avoid the Mexican.

Soon after the restart the yellow flags came out again – Roman Grosjean capping off a miserable weekend with his fourth crash, this time ramming Daniel Riccardo’s Toro Rosso in lap 65.

But Rosberg managed to avoid the crashes and bad luck which seemed to dog his rivals, finishing over four seconds ahead of Vettel to cement his victory.