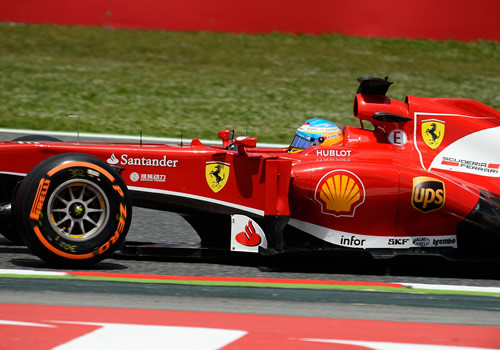 Fernando Alonso put in a sensational performance to win the Spanish Grand Prix to the delight of his home crowd at the Circuit de Catalunya.

Alonso, on a four-stop strategy, finished just under 10 seconds ahead of Kimi Raikkonen to put pressure on Sebastian Vettel at the top of the drivers’ championship.

The Ferrari front-runner started brilliantly from fifth, passing Raikkonen in turn one and rounding former teammate Lewis Hamilton on the outside of turn three.

By lap 13 the Spaniard was leading, passing Mercedes’ Nico Rosberg with ease to the delight of the crowd in Barcelona.

Alonso held a ten second lead from Raikkonen with 12 laps remaining and completed a faultless race to collect his second win in Spain after victory with Renault in 2006.

Ferrari team-mate Felipe Massa, who started ninth, had sat behind Alonso at the half-way mark, but Raikkonen came out of his final pit stop flying to pip the Brazilian to second place.

Raikkonen and Vettel went wheel-to-wheel on lap 33 and the Finn’s determination saw him pass the world champion, who was warned to protect the tyres on his Red Bull.

Hamilton and Rosberg had voiced concern over their Mercedes pre-race, despite the Silver Arrows securing a third straight pole, and it proved a miserable afternoon for the Brit in particular.

Rosberg salvaged some pride as the German overcame his Mercedes’ apparent lack of pace to finish in the points with a sixth place finish.

But Hamilton, who started second on the grid, made his frustration known to the Mercedes team over the radio when he was over taken by Williams’ Valtteri Bottas in lap 29.

Despite Mercedes reassuring the former world champion he was on for a fifth place finish, Hamilton was drawn into a battle with ex-team-mate Jenson Button for 14th place a lap later.

Button was passed, but gained revenge several laps later as he overtook the Mercedes new boy in a midfield battle, finishing eight and four places ahead of Hamilton.

Lotus’ Romain Grosjean was forced to retire for the first time this season early in the race, followed by Caterham’s Giedo van der Garde and Toro Rosso’s Jean-Eric Vergne.