Spanish Grand Prix 2013: What lessons did we learn as Fernando Alonso puts himself right in the mix of a close championship? 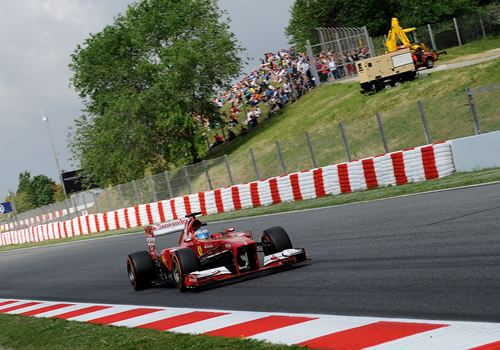 The Ferrari driver is undoubtedly a hero at the Circuit de Catalunya and his early passes in Barcelona were greeted with huge cheers from the Spanish crowd. Alonso put in a sensational drive to leave the home fans purring, taking the lead in lap 13 after starting fifth on the grid.
The Spaniard made short work of Mercedes’ pole-starter Nico Rosberg and fellow frontrow Lewis Hamilton, having passed Kimi Raikkonen in turn one. The former world champion utilised his Ferrari’s pace to storm clear of the pack with a four-stop strategy and collect a confident win nearly ten seconds ahead of Lotus’ Raikkonen.

Mercedes just not at the races

With Nico Rosberg starting on pole and team-mate Lewis Hamilton qualifying second, you could be forgiven for thinking this was going to be a weekend for Mercedes. But despite the Silver Arrows collecting their third pole position in as many races, Rosberg and Hamilton were well aware it was never going to be plain sailing. The German said after qualifying he was cautious going into the race and, with both drivers overtaken by Alonso early on, it is clear to see why. Mercedes just did not have the pace to compete and the most exciting part of Hamilton’s race was being dragged into a battle with former team-mate and fellow Brit Jenson Button in the midfield. Mercedes clearly have the potential for Hamilton and Rosberg to trouble the drivers’ championship leaders, but performances are coming all too inconsistently so far this season.

Fernando Alonso’s second-ever win in his native Spain, after a 2006 success with Renault, means both the drivers’ and constructor’s championships are still wide open after five races of the 2013 season. It was Alonso’s second win of the championship, Sebastian Vettel also has two wins, but Kimi Raikkonen’s consistency has put the Finn right in the mix. The Lotus driver has one win and three second places and sits just four points behind Red Bull’s Vettel with Alonso’s Spanish win putting him less than 20 points behind the German. Ferrari closed in on Red Bull in the constructors’ championship as Felipe Massa came from ninth on the grid to take a podium place and Raikkonen’s performance keeps Lotus in the hunt, despite teammate Romain Grosjean being forced to retire early on.