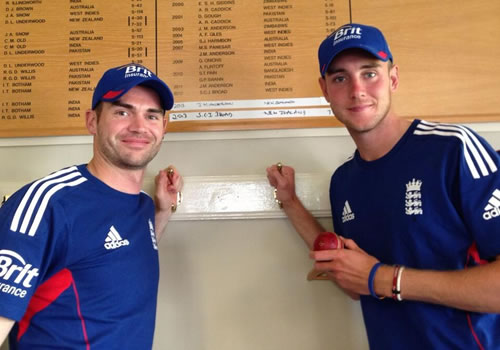 Stuart Broad took seven wickets in a devastating 11-over spell to help England rout New Zealand in the first Test at Lord’s.

Here is a selection of our favourite tweets from the professionals, both past and present and in chronological order, after the hosts secured a 170-run win against the Black Caps.

Former England wicket-keeper Alec Stewart ‏(@StewieCricket) is looking forward to a big day four: “May get a 250 lead minimum, hope for cloud cover to aid Anderson swing, pitch-spinning for Swann and England should win but as Ladbrokes say GAME ON!”

Legendary all-rounder Sir Ian Botham ‏(@BeefyBotham) urges supporters to arrive on time – it proved good advice: “Don’t be late today could be a great days play……start of a big summer!!”

Injured batsmen Kevin Pietersen ‏(@kevinpp24) is excited to cheer on his team-mates: “Nearly at Lord’s.. The drive to watch certainly isn’t the same as to play! But, hasn’t the last hour been great? #ENGvNZ”

Spinner Graeme Swann ‏(@Swannyg66) wants to get in on the action: “Can’t wait to have a bowl on this pitch…”

Youngster Joe Root ‏(@joeroot05) is thrilled to be part of a memorable England triumph: “What a day! loved every minute of it! Massive congrats to Broady and Jimmy – fantastic effort from everyone else too #lovewinning!”

Ashes-winning England captain Michael Vaughan ‏(@MichaelVaughan) taunts the Aussies: “Just watching the highlights and I have say I can’t believe NZ made 68… Ridiculously good bowling from @JimmyAnderson9 and @StuartBroad8. England might just play 2 bowlers against Australia… That’s all they need these days…..”

Phil Tufnell (‏@philtufnell) is loving the summer of cricket: “So NZ’s target wasn’t knockeroffable after all! Great bowling @StuartBroad8 and well played England. Cracking start to the Test summer.”

England bowler Steven Finn (‏@finnysteve) can’t remember such a devastating attacking display: “Amazing day’s cricket here at Lord’s. Some of the best bowling I’ve ever seen. Now settling in for the football with a few beers!”

Finally, Graham Onions ‏[email protected]) pays tributes to his team-mates: “Huge congrats to @JimmyAnderson9 on his 300+ wickets. From an early age he was destined to be one of England’s best bowlers.”