Arsenal transfers: Gonzalo Higuaín opens the door to a summer move to the Gunners by saying the north Londoners would "suit" him 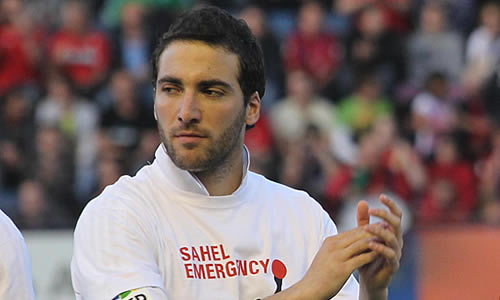 Gonzalo Higuaín has opened the door to a summer transfer to Arsenal by admitting that the Gunners would “suit” him.

The Argentina striker is set to leave Real Madrid this summer and Los Blancos president Florentino Perez has said that the La Liga club will listen to offers for the 25-year-old.

Arsene Wenger is keen to bolster his attacking options and has been linked with a swoop for Higuaín, with Tottenham and Liverpool also reportedly interested in the want-away striker.

And now, Higuaín has revealed that he would be open to a move to The Emirates.

“There have already been offers and I hope that Madrid do the best for me and themselves,” said Higuaín.

“Arsenal? They would suit me, I’m still young and I have goals.

“There are many possibilities. I want to go to a league where I’ll be put to the test.”

Higuaín has struggled to hold down a regular starting spot in the Madrid side over the past couple of seasons.

But he has still managed to score 122 goals in 266 games for the La Liga giants since joining the club from River Plate back in 2006.

Arsenal had a say on which club I joined last summer, says Van Persie