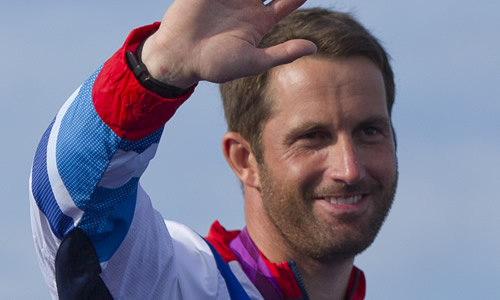 Great Britain’s four-time Olympic gold medallist Ben Ainslie insists he is acquiring all the skills necessary to mount a successful America’s Cup challenge after a record-breaking victory at the J.P. Morgan Asset Management Round The Island Race.

And after such a successful race, the Macclesfield-born sailor feels he is well-prepared to conquer one of the few remaining events it has yet to scale in the sport.

“It happened that the conditions were perfect and the boat was wonderful and the guys and the team did a fantastic job sailing it quickly so we ended up getting around in under three hours which was an amazing time,” said Ainslie.

“We are in a really good place with British Sailing and this race is evidence of that. At Olympic level we are very strong, as we are in off-shore racing and single-handed racing with guys like Alex Thomson doing great things.

“I guess the one thing in recent history is the America’s Cup and that is what we are trying to do with this team and we have a lot of talented sailors and designers and passionate people about the sport so it would be nice to go out and be successful in that arena as well.

“It takes a lot of experience but I think in the UK we have that skill set to do well in the competition.”

The race held particular significance to Ainslie and his teammates after they had attended the funeral of fellow sailor Andrew Simpson the day before, and he insisted breaking the record was a fitting tribute to his close friend.

“It’s really nice to break the record. One of the reasons for doing this race really was in memory of Andrew Simpson,” he added.

“We had his funeral on the Saturday which was a huge deal for everyone in the sailing world so we didn’t really have the record in mind and we just wanted to do the race.

“It ended up being a very special day for us in many ways, not just for winning the race.

“To take part in this race is something very unique and very special, it’s really iconic. There is a lot of history involved and I had done this race many times with several different boats and given the conditions all the competitors would have had a good time.”

The J.P. Morgan Asset Management Round The Island Race is the 4th largest participation sporting event in the UK and the largest yacht race of its kind in the world, attracting anything between 1,500 – 1,800 yachts and 16,000 competitors. www.roundtheisland.org.uk