British Grand Prix 2013: Mercedes driver Lewis Hamilton wants to do "something special" for his fans after sealing pole 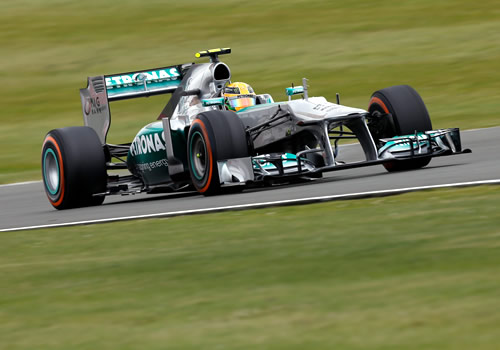 Lewis Hamilton said it was an “incredible feeling” to claim pole in his home race at the British Grand Prix at Silverstone.

Mercedes performed strongly throughout the session and Hamilton pipped team-mate Nico Rosberg to secure pole position in the final seconds of the third qualifying session.

Hamilton was overjoyed by the support from the crowd, standing atop his Mercedes and drinking in the rapturous applause and cheers from his fans.

It is Hamilton’s first pole since China and he becomes the first Brit to make the front of the grid at Silverstone in six years.

“It’s an incredible feeling – it feels like 2007,” said Hamilton. “The crowd have been great – such a great turnout – that was a lap for them.

“I hope we can do something special in the race. It’s phenomenal because I haven’t been feeling 100 per cent comfortable in the car.”

Rosberg will join Hamilton on the front row of the grid and put their success down to having the fastest car.

But he remained cautious about race day.

“We are confident we have improved and some of the other cars may be better than us but finishing in the top two can only be good,” said Rosberg.

Red Bull’s Sebastian Vettel, who qualified in third, congratulated Hamilton for a “phenomenal lap” but remains hopeful for tomorrow’s race.

“We will see what happens,” said the German. “It is a long race. I’m honestly very happy today.

“I don’t know if Lewis found a short cut or he just found something special here – it was a phenomenal lap.

“It is always nice to position well in qualifying here. I am looking forward to the race and we will see how are with looking after the tyres.”

The race looks set to be a battle between the Red Bulls and Mercedes as Kimi Raikkonen and Fernando Alonso face a tough challenge after struggling for pace all weekend.

Alonso, who qualified 10th, was clearly disappointed by his Ferrari’s performance, having admitted prior to qualifying that he needed to catch up championship leader Vettel.

“We were not competitive all weekend and it’s not normal to see Ferrari out of Q3,” said Alonso.

“We need to recover now and it was a bad Saturday. We didn’t improve the car enough in the last four to five races and we ordered some new parts but they didn’t do what we expected. We need to keep on working.”