British Grand Prix 2013: Nico Rosberg reflects on a "very special day" after winning his second race of the season at Silverstone 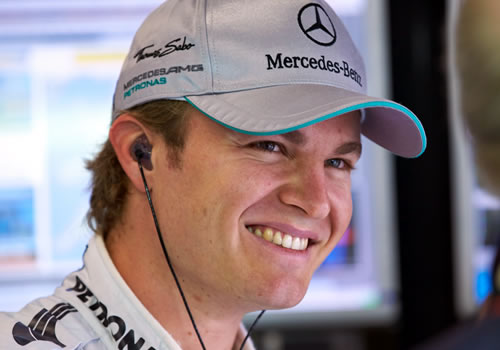 Nico Rosberg was the surprise winner of a drama-filled British Grand Prix at Silverstone as the German claimed his second victory of the 2013 season.

In an incident packed race – which included five explosive tyre failures – Rosberg and his Mercedes cruised to victory narrowly ahead of Mark Webber.

The race was overshadowed by growing concerns over safety, but nonetheless the German was thrilled to win for the third time in his career.

And he had words of consolation for his team-mate Lewis Hamilton, who drove an unbelievable race after suffering tyre failure in the eighth lap.

“But it was a massive disappointment for the team, for Lewis and most importantly the British fans.”

Hamilton, who started from pole position, was clearly disappointed after the incident scuppered his chance of victory.

Hamilton said: “The safety is the biggest issue, it’s unacceptable. It’s only when someone gets hurt that someone will be doing something about it.

“I think it’s a waste of time talking to the FIA, and if they don’t do anything that says a lot about them.”

Tyres were the main topic of the race, with second place man Webber calling the tyre failures frustrating.

Webber said: “There were a lot of issues with the tyres and we were lucky and it was a clean race for us.”

Ferrari’s Fernando Alonso, who finished third, was upbeat about the race, after what had been a poor weekend for the team.

Alonso said: “It was a good race for us. We got lucky to recover some points and it was a good result for us in the end.”

The Spaniard is now just 22 points behind championship leader Sebastian Vettel – he was able to close the gap between the pair after Vettel was forced to retire.