British Grand Prix 2013: Nico Rosberg wins his second race of the season ahead of Mark Webber and Fernando Alonso at Silverstone 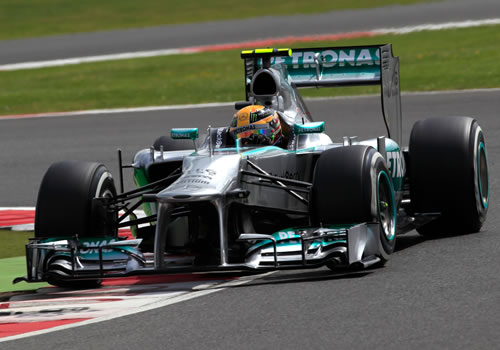 Nico Rosberg stormed to a surprise victory at the British Grand Prix after race leader Sebastian Vettel was forced to retire due to a transmission failure at Silverstone.

On the first lap the Red Bulls had mixed fortunes, with world champion Vettel gliding into second place past Rosberg’s Mercedes.

Webber and Lotus driver Romain Grosjean clashed, seeing the Aussie slip down to 15th by the end of the lap – suffering from significant front wing damage.

After a miserable qualifying session, Ferrari’s Felipe Massa shocked everyone, breezing from 12th place through the pack up to fifth.

Lewis Hamilton, starting from pole position, began to build up a comfortable lead, totting up a two-second advantage over Vettel by lap seven – but a left-rear tyre puncture one lap later saw the crowd favourite limping home to the pit lane.

Tyre problems ruled the day as Massa span off the track on lap 10 after his left rear tyre suffered the same problem.

Vettel now looked to be pulling away from the pack, leading the race by 18.3 seconds at the end of lap 13.

Engineers warned all teams over the radio to stay away from the kerbs as concerns began to grow over the structure of the Pirelli tyres.

And the drama continued as Toro Rosso’s Jean-Eric Vergne’s left rear tyre exploded on lap 15 at 190mph. The safety car was deployed as road sweepers and marshals attempted to clear the debris for six laps.

Hamilton, spurred on by the British crowd, began to crawl his way up the grid and by lap 31 he was battling for eighth place, scrapping with fellow Brit Paul Di Resta.

It was not meant to be for Vettel as his lead in the championship was reduced when a transmission failure on lap 42 saw him retire – his first DNF of 2013.

Safety fears grew once again when Sergio Perez’s tyre blew out for the second time this weekend on lap 46.

Webber and Kimi Raikkonen scrapped for second place in the final laps of the race, with the Australian snatching second place from the Finn.

There was further disappointment for the Finn as Spaniard Alonso stormed past into third place and later Hamilton flew by Raikkonen to take fourth.