Canadian Grand Prix 2013: The tragic death of a marshal overshadowed what was another dominant Sebastian Vettel display 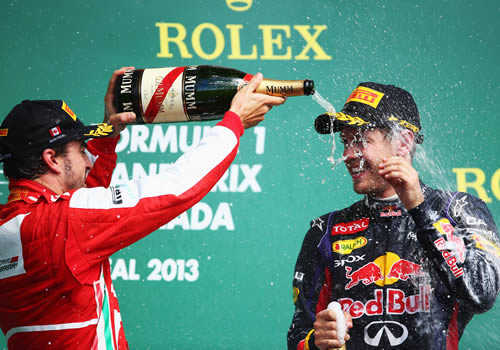 It takes just one ill-fated moment to overshadow an event.

Less than three hours after the chequered flag at the Circuit Gilles-Villeneuve in Montreal, tragic news of the death of a track-side marshal filtered around the paddock and the Formula One world, casting a shadow over what was an exciting and competitive race around the Île Notre-Dame.

The marshal, a member of the Notre Dame Automobile Club that annually supply members to help out at the Grand Prix, had died in a Montreal hospital from the injuries he sustained following what was regarded as an “unfortunate accident” involving a forklift which was on its way back to the pits after recovering the stricken Sauber of Esteban Gutierrez, who had parked his car by the side of the track towards the end of the race.

The sport’s first marshal fatality since 2001, this incident under tragic circumstances once again highlights the risks taken by these particular volunteers at each and every weekend.

It is this risk and determination that allows Formula One races to happen, and although this will remain a freak accident in comparison to previous marshal fatalities, his death will now unfortunately be forever associated with the 2013 Canadian Grand Prix, just like Graham Beveridge and the 2001 Australian Grand Prix and Paolo Ghislimberti and the 2000 Italian Grand Prix.

The tragic incident will also cast a cloud over what was a 29th career victory for Sebastian Vettel, who now, with a lead of 36 points over second-placed Fernando Alonso with only seven races in, is in an extremely comfortable position as the season enters its crucial summer leg.

For Vettel in Montreal, the usual adjectives like “dominant”, “untouchable” and “supreme” were once again thrown about, while for those chasing, the implications became ominous.

In finishing second from sixth on the grid, Fernando Alonso will take heart from yet another strong race performance, but will once again leave behind a race weekend that he could and should have won.

Ferrari’s issues in qualifying remain a problem for both the Spaniard and the team.

A 36-point deficit at this point in the season is by no means a mountain, but should the Spaniard remain on two world championships come the season’s end in Brazil this November, he will in no doubt rue his car’s overall performance in the opening half of the season.

The same evidently goes for Mercedes and Lotus, who continue to find themselves gradually falling back with each passing weekend.

Lewis Hamilton showed signs of competitiveness in small bursts, but was never in the position to threaten for the victory; Nico Rosberg had his most uncompetitive weekend in four races, while the Lotus pair of Kimi Raikkonen and Romain Grosjean had their worst double finish of the season so far.

Amongst all this, Mercedes continue to remain embroiled in the secret tyre test saga which has shadowed the team since the allegations surfaced a fortnight ago in Monaco.

With the team now summoned to an extraordinary tribunal inquiry in two weeks’ time, seven days before the next race in Silverstone, evidence continues to mount which only suggests that the team broke the rules in staging a tyre test following the Spanish Grand Prix in order to better understand its under-performing tyre performance.

In a fortnight’s time, attention will turn to see whether or not the FIA will find the need to punish the team by way of a fine, or hand down a more severe punishment which could affect the team’s lingering title aspirations.

The former will be seen as a let off, the latter will only add to precedent to anyone looking to bend the rules down the line; everyone in the paddock bar Mercedes will trust that the FIA will continue its no-nonsense approach when it comes to rule infringement.

All of the above has played delightfully into Red Bull’s and Vettel’s hands, whose overall competitiveness from the very first practice session serves as the epitome for success in Formula One.

Silverstone in three weeks’ time will be a crucial evaluation for those taking the fight to Red Bull, and another Vettel victory there could prove fatal for both those chasing, and the neutrals who hoped three months previously that this year would be just as tight as the previous one.

Driver of the weekend: Sebastian Vettel