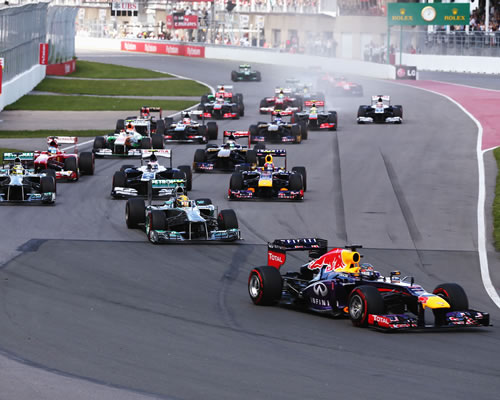 Sebastian Vettel leads the field at the start of the race Photo: Getty Images/Red Bull Racing

Victorious Sebastian Vettel believes he can get on with winning a fourth world championship after his first Canadian Grand Prix victory at the Circuit Gilles Villeneuve in Montreal.

The three-time world champion’s victory was made all the sweeter for Red Bull as they finally notched their first North American Grand Prix win in emphatic style.

And the German, who led from pole to flag, admitted his delight in finally sealing the victory after so many near-misses.

“Finally we got our first win it’s off the list now and it was great to win – the sun came out as well so it doesn’t get any better,” said Vettel.

“It was a great race and I had a great start which was important. I just kept that gap throughout the race and at some points we had a full pit ahead of others.

“We had good races here before but it didn’t come together to win, then I lost it in the last lap two years ago which was my fault but I made up for that today.”

Vettel’s joy was shared by Ferrari’s Fernando Alonso – the Spaniard fought his way up from sixth on the grid to pass Mercedes’ Lewis Hamilton with seven laps remaining.

And the two-time world champion was relieved to seal a podium finish after a problematic qualifying session, admitting it felt like a victory in its own right.

“Yesterday we didn’t have a good qualifying,” he said. “I didn’t get a fast lap and the conditions were not easy.

“But we knew the pace in dry conditions was good. We had high hopes. I was fighting top drivers and I had very good fights with Mark, Nico and Lewis at the end.

“It was not easy because they are super-talented. But I think second tastes of victory, because we scored some good points after a very difficult weekend.”

Hamilton could not hide his disappointment as he failed to hold onto what could have potentially been his highest finish for Mercedes.

“I have a great time here every year,” he said.

“I think a small part of the wing came off it was really close, we had a great battle, he [Alonso] is a fair driver and had a great drive.

“We just have to keep pushing so we can get closer to these guys.”