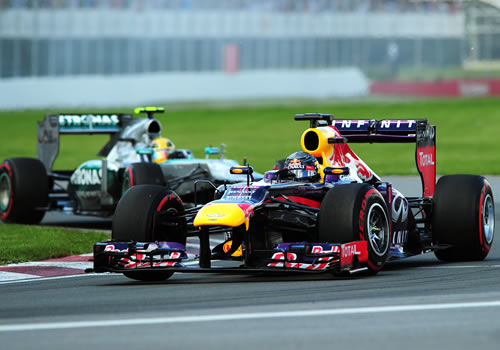 Sebastian Vettel’s bid for a fourth successive title was given a huge boost after the German cruised to his third win of the season at the Canadian Grand Prix.

On the first lap, surprise third-placed qualifier for Williams, Valtteri Bottas, started to tumble down the order as Mark Webber and Alonso breezed past.

But it was business as usual for world champion Vettel, who had totted up a four-second lead over Hamilton within the first eight laps and sealed his first ever win in Canada.

Kimi Raikkonen – starting in tenth after a one-place grid penalty for a pit lane infraction – was struggling to find pace, having only moved up to eighth by lap 12.

During the first round of pit-stops, Mercedes’ Nico Rosberg got the jump on Webber for third and started to hold up the faster Red Bull.

As the Monaco Grand Prix winner kept Webber at bay, Hamilton swept into the pits on lap 20 and rejoined the track several seconds in front of both.

McLaren had won five of the last seven Canadian Grand Prix but Jensen Button was toiling away in 16th midway through the race, while Sergio Perez fared little better in 12th.

On lap 31, Webber finally got the better of Rosberg – though now had Alonso in his mirrors after the Spaniard took advantage of the pair’s scrap.

Meanwhile, Vettel lapped Raikkonen – who was second-place in the Drivers’ Championship before the race – and was building on an ominous 15-second lead over Hamilton.

But his Red Bull teammate Webber saw a chunk of his front-wing carved off on lap 38 as Caterham backmarker Giedo van der Garde left too little room while cornering.

It took a further four laps for the Australian to fall prey to Alonso, who turned his attention to chasing down second-placed Hamilton.

However, the Spaniard was left with too much work to do to catch Vettel, who clinched victory with 15 seconds to spare.