Canadian Grand Prix 2013: What lessons did we learn after Sebastian Vettel cruised to his first-ever victory in Montreal? 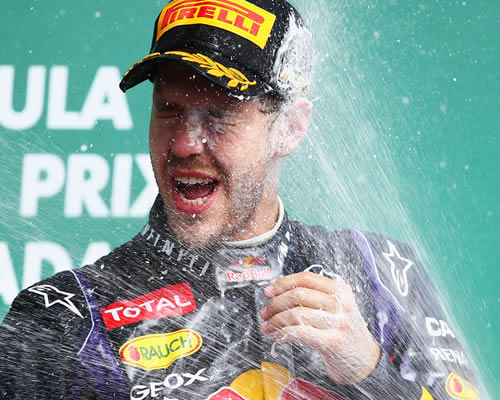 The underdogs must pray to the rain gods

It only took a little drizzle in qualifying to make Williams look good as Valtteri Bottas splashed to a nosebleed-inducing third on the grid. Yet with Circuit Gilles Villeneuve adorned in some Sunday sunshine, the Finn sunk fast and painfully. He had promised to jump into the track’s enclosed lake if a points finish came his way, but he could only eke out 14th – just two places higher than teammate Pastor Maldonado. As cars only get more reliable and crashes seemingly less frequent (Romain Grosjean aside), backmarkers’ must hope for lashings of rain should their aspirations reach any higher than trundling home having been lapped the least.

Vettel’s saunter around Canada was eerily reminiscent of a certain German who used to bore Formula One crowds to tears with win after win, race after race. Yes, the comparisons have been done to death already, but in his untouchable prime Schumacher was only ever picked up by TV cameras on the first and last laps – having coasted to victory with such assuredness that film crews scrabbled around in vain to try and entertain their audiences. And no matter how many people try to kid themselves, everyone knew Vettel would leave all trail in his wake on Sunday. Ruthlessly efficient, efficiently tedious.

McLaren didn’t get much attention in Montreal. Not surprising considering their abysmal form, but throw in the fact the team had won five of the last seven Canadian Grand Prix, and their supersonic decline seems all the more frightening. They lost Lewis Hamilton but retained a world champion in Jensen Button and acquired the services of Sergio Perez, who performed miracles for Sauber in 2012. From fighting for championships to being in Force India’s shadow – they need to turn it round before success becomes a distant memory. Just ask Williams.