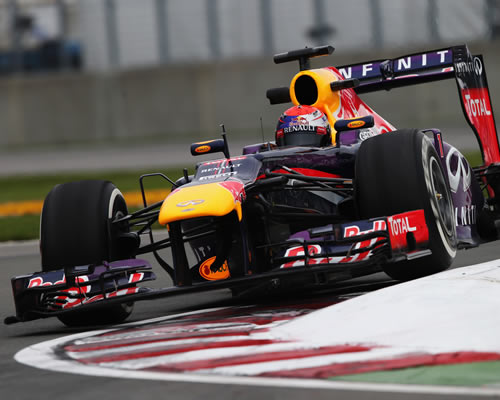 Q1 began with light rain and though all cars went out on super-soft tyres to test track conditions, the circuit was too wet and intermediates were fitted.

The slippery conditions caused even the best to make mistakes, with world champions Kimi Raikkonen and Fernando Alonso both going onto the grass.

As the cars found some pace, Red Bull’s championship leader Vettel went quickest with a 1:22.318 ahead of Alonso and team-mate Mark Webber.

Felipe Massa crashed out at turn three, causing a red flag with just under two minutes of Q2 to go as the stewards moved his car from the barriers.

The remaining 15 cars took to the track for another lap, Hamilton setting the quickest time after the restart with a 1:27.649.

Vettel was looking for his third successive Canadian Grand Prix pole and set a 1:25.425 ahead of Hamilton and Bottas.

The session’s climax saw the track get slower due to more rain, with no-one able to improve their time and Vettel secured his Montreal pole position hat-trick.