Champions Trophy 2013: AB de Villiers insists South Africa had "no excuses" after a seven-wicket defeat by England at the Oval 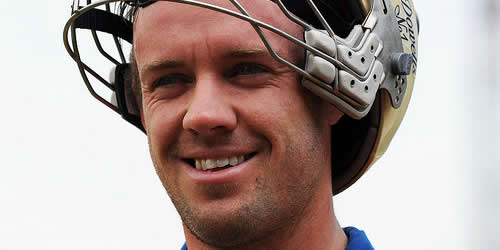 AB de Villiers insisted that there were “no excuses” for his side’s lacklustre Champions Trophy semi-final performance after the Proteas suffered a humbling seven-wicket loss to England at the Oval.

De Villiers’ men were put into bat by the home side, and suffered an early blow as Hashim Amla and Colin Ingram were dismissed for one and nought respectively.

After a middle-order collapse, David Miller (56) and Rory Kleinveldt (43) did their best to give South Africa a glimmer of hope, but England’s batsmen proved too strong for the faltering Proteas attack.

De Villiers was left to reflect on a poor all-round performance, and offered no excuses for his side’s lack of runs and wickets.

“I won’t say the toss was that important,” said De Villiers, 29, said. “We didn’t play well, we were under pressure from the word go and you have to give credit to the English bowlers. There are no excuses.

“There were sparks of life from David Miller and Rory Kleinveldt, I’m especially proud of them as they kept fighting to the end. But we weren’t good enough in the top order.”

Alluding to Dale Steyn’s potentially game-changing withdrawal from the match due to a hip injury, De Villiers admitted that the team had come up short in his absence.

“It was probably one of the toughest team selections we’ve made, but it’s easy to look back and say we should have played another guy,” he added.

“We tried everything with the ball; we just couldn’t get that breakthrough and get four, five and six. – I believe we have the talent and the potential to have won this tournament, but we didn’t play well enough.

“It’s been a great tournament, nice and short and sweet, and the best teams come up on top.”