Chelsea transfers: Blues confirm that a deal has been agreed to sign Andre Schürrle from Bayer Leverkusen for around £18m 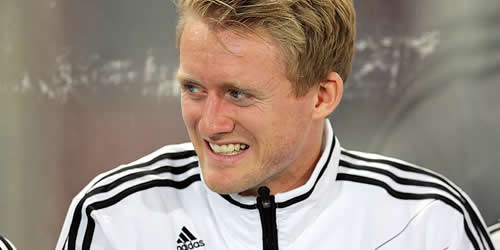 Chelsea have confirmed the signing of Andre Schürrle from Bayer Leverkusen in a deal thought to be worth around £18m.

The Blues have long been linked with a move for the 22-year-old striker, who scored 11 goals and made six assists in 34 top-flight appearances for Leverkusen last season.

“Chelsea Football Club and Bayer Leverkusen have reached an agreement for the transfer of Andre Schürrle,” read a Chelsea statement.

“The deal is subject to the completion of legal documentation and related matters, including personal terms and passing a medical.

Schürrle is Jose Mourinho’s first signing since penning a four-year deal to return as Chelsea boss earlier this month.

Speaking at his official unveiling at Stamford Bridge on Monday, the 50-year-old hinted that he would be looking to make “a few” additions to his squad ahead of next season.

“I think every club, especially a club like us, has the ambition to add a few players [to] improve the squad and improve the competitiveness between them,” he said.