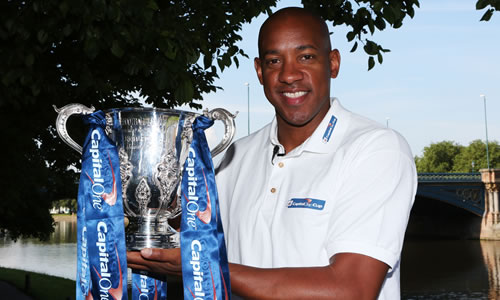 Dion Dublin is a Capital One Cup ambassador Photo: Handout

Looking at the first-round draw, so much pride will be at stake when the Capital One Cup returns in August, with a lot of local rivals paired against one another, but I will have my eye on Gary Johnson’s Yeovil Town after the wonderful job he has done there.

Promotion last season was fantastic and he is a good coach. I think that’s why the club wanted him back for a second spell because they knew what he can achieve with the players they had.

Gary was my reserve team manager when I was at Cambridge United and he is a very calm character who talks to his players in a composed manner – he’s a lesser Arsene Wenger so to speak because he doesn’t lose his temper very often.

He will go under the radar in this competition, go about his business and is the type of man with the type of team that could surprise a few people in the latter stages if they get there.

First though they will have to deal with Southend United, who didn’t have a bad finish towards the end with a cup final and a top-half finish, and in Phil Brown, they have a more-extravagant manager with a point to prove.

Queens Park Rangers are the only relegated Premier League side in the first round and they are away to Exeter City but they will have to take this competition seriously, they have no choice.

They have to do something and get to the latter stages, not for the money, but for the pride of the individual footballer and the manger – the players themselves won’t be happy with how it ended last year and they will come out absolutely flying.

It might take a whole summer for Leicester City to get over what happened to them last season, getting pipped to the post by the smallest of margins, but their players should have the confidence they are good enough.

And likewise for Brighton, the disarray off the field is not a great start but honestly you would rather it be off the field than on it. Then again that can cause a domino effect so they need to get the manager and the hierarchy situation sorted out.

It is nice that the Capital One Cup is so open and that everybody has got a chance. All you need to do is put a run together, get the players clicking at the right time, get your best players performing at the right weekend and anything can happen.

Dion Dublin was speaking on behalf of credit card company Capital One, sponsor of The League Cup

Lewis Holtby desperate to net his first goal for Tottenham