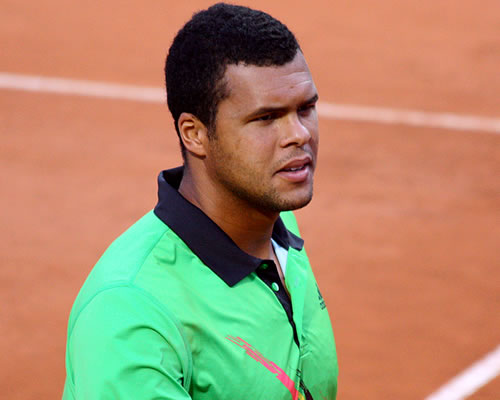 When it comes to Roger Federer, Jo-Wilfried Tsonga and Grand Slam quarter-finals, there is just a bit of back-story.

So as the bottom half of the French Open draw channelled the No2 and No6 seeds to another last-eight clash, there was some licking of the lips in anticipation.

Already Federer, champion at Roland Garros in 2009 and four more times a finalist, had ticked off the latest in an unbroken run of 36 Grand Slam quarters to get this far—his 40th overall. And with Tsonga winning through his section as well, the two could tick off the only Grand Slam quarter-final they had yet to contest.

They met no fewer than eight times in 2011, including the quarters of Wimbledon and the US Open. They added the Australian Open this year in their first match since New York. And a look at those Grand Slam meetings made it abundantly clear why their fourth was so eagerly awaited.

At Wimbledon, Tsonga became the first man to defeat Federer from two-sets-to-love down at a Grand Slam. At the US Open, it was Federer who won through in a more straight-forward three sets. Then in Melbourne this January, they played another dramatic five-setter that see-sawed between the two—Federer just taking sets one and three in tie-breaks—until the Swiss sealed the win, 6-3 in the fifth. They were separated by only five points out of a total of 333.

So although Federer held a 9-3 advantage over Tsonga, with the Frenchman’s only other two wins coming in Montreal—and again in a deciding set—there was a sense that Federer was vulnerable to the charismatic, confident man playing in front of an adoring home crowd.

He also pointed out that, great friends though they are, the competitive juices would be flowing for both: “I know him very well and there’s no real secret between us tennis-wise…He’s proved his worth in the past.

“I believe in my abilities and he should do the same with his: No doubt he does…I know he can beat me and he knows he can beat me. But I’m going to make sure that that doesn’t happen.”

There was certainly no doubting Federer’s fighting spirit: That was clear in his comeback from two-sets-to-one down to win against another troublesome Frenchman, Gilles Simon. But Tsonga had yet to drop a set in the tournament and was, to all eyes, playing the kind of tennis that just might cancel the memory of his quarter-final here 12 months ago. Then, he had four match-points to beat Novak Djokovic but lost the fourth set tie-break and the decisive fifth set. Now, with the help of coach Roger Rasheed for the last six months, Tsonga looked more confident, more consistent and ready to step up. Federer would need more than just fighting spirit.

The French tactics were clear in the opening games: serve wide and high to Federer’s backhand, and play hard and angled to his backhand the rest of the time. Combined with high accuracy—77 percent on first serves and only nine errors—he played contained, attacking tennis, forcing Federer off balance and into errors. Federer took the first break in the fifth game with some early reads on the Tsonga serve backed up by with some bold net plays, but Tsonga broke back in the eighth as Federer mistimed a sequence of forehands.

Federer continued to struggle with Tsonga’s attacking pace and variety but also with the wind and his own timing. He shanked three backhand returns in a row as Tsonga served for a 6-5 lead and fired an easy smash into the net on the first point of his own serve. Federer managed to pull back from 0-40 down with three big serves and a stunning cross-court backhand passing shot, but it was not enough and a shanked forehand conceded the break and the set, 7-5.

Tsonga looked both calm and confident: He led on points, 38-29, while Federer led on errors, 13-7. And that showed in the momentum in the second set, as the gap widened.

In the second game, Federer made two forehands errors—his tally on his killer wing now up to 12—and two backhand errors to hand over a love break, while Tsonga served with pace and variety to hold for a 3-0 lead.

Federer only held on by the skin of his teeth on his next two service games, too, hitting one of what would become a growing number of overheads into the net.

But for every ball that Federer hit long or wide, Tsonga hit with precision and power, and with a tactical smartness that has sometimes lacked in the past. He fired from one wing to the other, picked up short balls and slotted down-the-line backhand winners. All of which served only to pressure Federer further, and Tsonga served out the set 6-3 in a tidy 35 minutes, and with an increased points margin.

If there had been any doubt about the loyalty of the Philipp Chatrier crowds, there could be no doubting it now. With each set, they became more strident in cheering their man—a popular player beyond the confines of France but loved here. It is rare that Federer finds so little encouragement—though they cheered his occasional flashes of brilliance and his holds of serve—and he grew still more subdued after conceding a break in the first game of the third set with a double fault.

The Swiss urged himself back into focus and broke back, but Tsonga recovered his composure immediately to pursue his prey and Federer simply could not resist. Having fought off break points in the fifth game, he hit a couple of wayward overheads in the seventh to seal his fate. Tsonga broke, and then broke again to take a famous victory, 6-3.

Federer had nothing but compliments for his friend: In all areas he was better than me and that’s why he won. I’m pretty sad with the result. Disappointed with the way I played…but give some credit to that old Jo-Willy. He was better in all departments.”

It is 30 years since the last Frenchman won at Roland Garros: Yannick Noah in 1983. This win takes Tsonga to the semis here for the first time after so closely missing the cut against Djokovic last year. He now has a very real chance of reaching his first Grand Slam final since he was runner-up to Djokovic at the Australian Open in 2008.

That he has got this far without dropping a set also says a lot about his form and his confidence, and he will need every ounce of both against the resilient Spaniard, David Ferrer, who will be looking to reach his first French final.

Ferrer ended the fairytale run of Tommy Robredo, 6-2, 6-1, 6-1, in just an hour and 25 minutes, and affirm what he has proven in this last 12 months: that he is playing some of the best tennis of his career.

Ferrer also leads Tsonga 2-1 in previous matches—but their history will have little bearing on the next one. Ferrer will take to Philipp Chatrier for the first time this year, and to a crowd who believes this is Tsonga’s time. It has the makings of a duel to the death—and will be the hottest ticket in Paris.