French Open 2013: Novak Djokovic and Rafael Nadal will face each other in the semi-finals after both record straight-sets wins 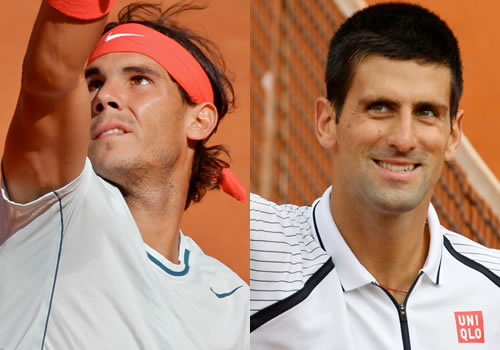 Rafael Nadal and Novak Djokovic will face each other in the semis Photo: Marianne Bevis

On one side of the net stood a Grand Slam champion who knew how it felt to be No1 in the world.

He was, in Paris this year, just beginning to show the form that had made him one of the most formidable opponents in men’s tennis, despite dropping uncharacteristic sets on the way to the quarter-finals.

He took on a man who had yet to reach a Grand Slam final but who was enjoying his highest ranking since 2008; a man who possessed one of the most striking single-handed backhands in tennis; who had won a clay-court title this year and beaten a top-two player along the way.

Yes, such were the similarities between the two quarter-final matches that would decide the semi-final line-up for the 2013 French Open.

Both were, on paper, David and Goliath meetings.

Rafael Nadal, going for a record-breaking eighth French title and his 12th Grand Slam overall—and with 40 wins to just two losses this season—had not even dropped a set in his previous nine meetings with No9 seed Stan Wawrinka. He also faced, in the Swiss, a man who had survived the severest of tests in his previous match, a glorious but exhausting four-and-a-quarter hours against Richard Gasquet, winning 8-6 in the fifth set.

And yet Wawrinka was proving to be a man at last fulfilling his great talent and stepping out of the shadow of his illustrious compatriot Roger Federer to climb back to the No9 ranking he first achieved in 2008.

Since the start of the year, Wawrinka had been working with a former Roland Garros finalist, Magnus Norman, and his confidence seemed to grow daily. He came to Roland Garros second only to Nadal in clay-court match-wins, 23 of them, and reached his first Masters final in Madrid since 2008 with wins over Jo-Wilfried Tsonga and Tomas Berdych. In Monte Carlo, he defeated the No2-ranked Andy Murray in 58 minutes and, at the Australian Open, resisted Novak Djokovic until 10-12 in the final set.

Even so, with a leg already heavily strapped in his Gasquet match, Wawrinka faced a mountain of a task in the seven-time champion.

In the other quarter-final, the Goliath was Djokovic while David was the oldest Grand Slam quarter-finalist since 2005, and the oldest to reach the last eight at the French Open in 42 years. And while the world No1 was bidding to reach his 12th consecutive Grand Slam semi-final, the 35-year-old Tommy Haas, was aiming to reach his fifth 14 years after his first one in Australia—and his first at Roland Garros.

But age was proving deceptive when it came to the German. Plagued by injury, surgery and family disaster since those earliest semi-finals, Haas was now playing with the vigour of a man many years younger, who had rocketed up the rankings from outside the top 100 a year ago. He had his sights set on the top-10 for the first time in six years.

And while Djokovic led their head-to-head 4-3, Haas won their most recent match in straight sets, in Miami three months ago. And the Serb, despite huge incentives to win here—to complete his career Grand Slam but also to fulfil the last wish of his former coach Jelena Gencic, had yet to produce his best tennis in Paris.

To keep on top of these mirror images of matches required the most nimble of attention-spans as both got under way within 10 minutes of each other.

Djokovic and Haas were first out of the gates and both hit their stride strongly with love holds of serve peppering the first six games. But Haas came under pressure in the seventh, going down 15-40 on serve, and although he pulled it back to deuce, a down-the-line forehand winner from Djokovic made the break, and the Serb consolidated with another love hold.

The ninth game was a near carbon copy of the seventh, except that the Djokovic forehand winner struck on the first break point. He took the set 6-3, having dropped just one point out of 17 on serve.

Within 10 minutes, Nadal had also sailed to a 6-2 first set, though Wawrinka looked more fragile as his backhand—such a factor in his huge winners-count against Gasquet—let him down time and again. Nadal broke in the opening game and again in the fifth as another Wawrinka backhand went long. The Swiss saved a break point and three deuces in the seventh game but Nadal, clearly thriving in the warm sun and dry court, served out the set to love, with an ace, 6-2.

By now, Djokovic and Haas had dug into a highly competitive second set that edged to a tie break, though Djokovic looked in control with an effortless, metronomic rhythm from the baseline. As they reached 6-6, he had still dropped only three points on serve, but now that changed, and Haas took an early, though marginal, advantage, 4-2. Djokovic levelled and earned set point courtesy of a superb 24-shot rally that he took with a backhand winner. He served out the set, 7-5.

Nadal’s match now started to reel in the one on Suzanne Lenglen with a quicker second set, though Wawrinka—like Haas—found greater resistance against the ever-improving Nadal. The Swiss was broken in the third game but began to get his backhand working more consistently to open the court for some volley put-aways. He broke back in sixth but Nadal simply upped his level and made two outrageous forehand winners down the line to break back, and the broke again to take the set, 6-3.

Such was the damage—both physically and mentally—that Nadal was inflicting on the Swiss that even a medical time out before the third set could not help. The Gasquet match was taking its toll and Nadal surged to 5-0 before the Swiss could respond with his single game of the set. The match was done and dusted, 6-1, ahead of Djokovic and Haas.

The German, though, went down fighting in the longest set of the match, just five minutes short of the hour, and it looked as though a loss of concentration from Djokovic may cost him dearly.

Already Haas had quickly pulled back an early break but as his error count crept up, a second break in the seventh looked fatal. But Djokovic, with 41 winners on the board to Haas’s 16, made rare errors off each wing to give the German an opening and Haas took it on the dot of two hours.

Still Djokovic maintained a near zen-like calm: He knew, as most watching knew, that he had been the dominant player throughout. A weary-looking Haas faced off two break points and four deuces, but when a double fault offered a third chance, Djokovic snatched it, and served out the match to love, 7-5, with his 46th winner.

It is, as many have pointed out before, what champions do. Both Nadal and Djokovic rose to their biggest challenges with their best tennis—and make no mistake, both Wawrinka and Haas have not only played outstanding tennis in Paris but shown great fighting spirit.

It means their next match, against one-another, may well be the match of the tournament. It will not decide the French Open champion but may well be the spring-board to do so.

Nadal is in the form to win that record eighth title; Djokovic is in the form to seal his career Grand Slam. The final, whether it is against Jo-Wilfried Tsonga or David Ferrer, will be another David and Goliath moment.