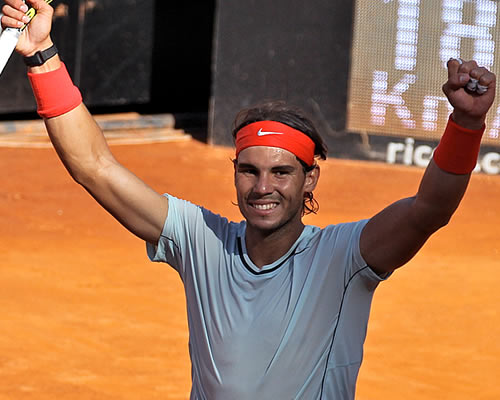 The size of the Goliath that Roland Garros’s David—Ferrer, that is—had to take on in his first ever Grand Slam was, in a word, huge.

For the bald statistics of the giant of clay-court tennis, Rafael Nadal, need no elaboration to strike fear into the heart of anyone venturing onto the burnt orange dust that he has dominated for almost a decade:

– Nine consecutive French Opens, garnering seven titles—with his eighth now up for grabs—and with one match lost: a 58-1 record;

– Despite not returning to the circuit until February, a tour-leading six titles, 42 match wins and 37 clay court wins in 2013;

– Owner of 41 clay titles, five of them this year;

And yet Ferrer, at 31 years old, had recently begun to rewrite his own story. A constant presence in the top 20 since 2005 and in Grand Slams since his first in 2003, he peaked at No4 in the rankings in 2008, considered quitting when he dipped in form and rankings in 2009, but instead came back better and stronger.

His extraordinary endeavours—an unmatched work-ethic, a head-down, roll-with-the-punches attitude and ever-improving skills in his serving and net play—not only took him back briefly to No4 this year, but ticked off new achievements:

– A first semi-final at Roland Garros last year, backed up by a first quarter-final at Wimbledon and subsequently the semis of the US and Australian Opens;

– A first Grand Slam final this week without dropping a set;

– The No4 ranking next week—and a new career-high No3 should he win.

The odds were, without doubt, against Ferrer, the oldest man to reach the French final since 1990, and he knew it:

“Defeating Rafa is very difficult on any surface; it’s even worse on clay. But once again, I’m going to try to play a beautiful match. I don’t want to think of whether it’s the occasion, the opportunity of my life, if it’s a dream.”

Time and again, through seven finals, all on clay, he had come off second best—as well as in their two previous Roland Garros meetings—but rarely had the result been a whitewash. And playing the most aggressive tennis of his career, he had taken ‘Goliath’ to three sets in their last two meetings, the quarter-finals of the Madrid and Rome Masters.

One thing was in no doubt: Win or lose, Ferrer would leave body and soul on Philippe Chatrier.

And it all started so well for the diminutive Spaniard, a hold to love that boasted two aces. Nadal followed suit, and then came two breaks of serve as both men opened up their opponent’s serve and took control of the baselines rallies.

The conditions were cold and damp, and that worked both for and against Ferrer: the vicious top-spin of Nadal did not fly quite so high, but Ferrer had to work hard to get any pace behind his ground strokes—and without speed and penetration, he could not work space to come forward for the put-away.

So both men struggled to make winners—by 3-3, they had only five between them—while the error count was in double figures. Slowly but surely, though, Nadal found his range better, made his first down-the-line backhand winner and, on a second break point, slotted a cross-court winner past the approaching Ferrer.

For a moment, it looked as though Ferrer would repeat his break-back but Nadal made his first ace and then a forehand winner to hold and broke again for good measure to take the first set, 6-3.

Ferrer’s error count continued to climb as, for the first time in the tournament, they outnumbered his winners. One off his backhand threw away a break chance in the opening game.

Nadal, meanwhile, kept pounding his forehand wide to the Ferrer backhand, making it almost impossible for Ferrer to make ground, and as soon as he ran round his backhand to drive his off-forehand across the court, Nadal was on it with a winner into the open court.

Three such forehands from Nadal broke Ferrer in the second game and, playing his best tennis of the match so far, Nadal went 3-0. Now with the rain starting to fall, Nadal upped the pace further, eager no doubt to avoid the disruptions that marred last year’s final.

Ferrer survived a long fourth game and a break point to get on the board and that seemed to lift his own game. He made two drop-shot plays and then rushed the net to go 40-15 on Nadal’s serve. As the game extended towards 10 minutes, he earned two more break chances, but a 29-stroke rally, full of glorious shots from all over the court, went to Nadal and he powered through to a hold.

The set was already 38 minutes old and the 4-1 scoreline did little justice to the tightness of many of the points. Yet it felt as though Nadal was in complete control, and that only a dramatic turn-around would alter the direction of this match. And drama certainly did arrive, but not from the players.

Twice protesters interrupted play, first some banner-wavers as the top of Philipp Chatrier—and Ferrer was broken—and then a more serious disturbance as two masked men leapt from a box behind the players with a lit flare. They were quickly brought down by security guards, but again it disrupted the concentration of both men as first Nadal and then Ferrer were easily broken, but Nadal had the second set, 6-2.

After another exchange of breaks at the start of the third, there was a brief rain break—Nadal pushing to stay on court while Ferrer was ready to leave it. In the event, they stayed, for there was little point in delaying the inevitable. Ferrer levelled with his best service game since the first in the match, 3-3, and then Nadal opened his shoulders to head for the finish-line, 6-3.

It was, overall, an inconsistent and lack-lustre final, but what does not lack lustre is Nadal’s trophy cabinet.

He became the first man to win the same Grand Slam title eight times, and also became the leading performer at Roland Garros with 59 match-wins. What’s more, his 12th Major takes him ahead of illustrious names such as Rod Laver and Bjorn Borg on the all-time list.

Those achievements in themselves are outstanding, but arguably his comeback this season has been an even more remarkable story. After seven months away from tennis with knee injury, he returned in February to reach the final of all nine tournaments he played, winning seven—including three Masters and a Grand Slam.

And although he will, for the time being, slip back to 5th in the rankings, he has only 45 points to defend, at Wimbledon, until the end of the year. His next big achievement, therefore, could be reclaiming the No1 ranking by year end.