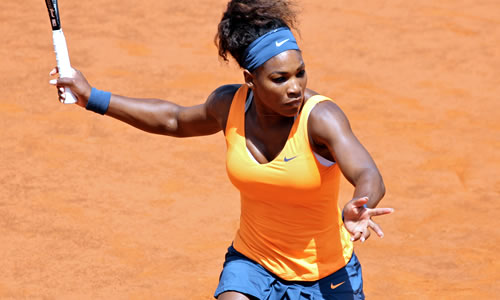 The draw of this year’s French Open featured many women who had won the Suzanne Lenglen cup before—and more who had come within touching distance in the finals.

Of the seven champions at Roland Garros, two stood head and shoulders above the rest when it came to expectations for a repeat victory: the No1 seed and 2002 champion Serena Williams and No2 seed and defending Maria Sharapova. Neither has yet to be threatened.

There were high expectations for another pair of former champions, too: No6 seed and 2011 champion Na Li reached the finals of the Australian Open and Stuttgart; No14 seed Ana Ivanovic, winner in 2008 and runner up in 2007, reached the semis in Madrid. However Li crashed out in the second round, and Ivanovic made no impact against No4 seed Agnieszka Radwanska in the fourth round.

Then there was the No9 seed, Sam Stosur, a finalist in Paris in 2010, and a quarter-finalist in Rome last month. She came up against former No1 Jelena Jankovic, who proved that her rise in the rankings since a low of 24 in February was no flash in the pan.

So far this year, Jankovic has reached the final in Bogota and Charleston—where she took the first set against Williams—and the semis in Miami. Just as note-worthy, she has three times reached the semis at Roland Garros. Only the unseeded Jamie Hampton stands in the way of her fourth.

The 32-year-old Francesca Schiavone won the title in 2010 and was a finalist the next year, but her form this season took a dive as seven times she fell in the first round of tournaments. There was a glimpse of the old Schiavone winning the title in Marrakech—though she faced no woman in the top 30—before two first-round losses in Madrid and Rome. She came to Paris ranked at 50.

The other was Svetlana Kuznetsova, finalist here in 2006 and winner in 2009, and a presence in the top five throughout that era. But a combination of injuries and loss of form since that peak saw her slowly slip down the rankings. She started 2013 at No72 but a strong run at the Australian Open, reaching the quarter-finals, and further signs of a renaissance through several top-20 wins, saw her arrive in Paris just outside the seedings.

And both Schiavone and Kuznetsova defied the odds to reach the fourth round, leaving seeds in their wake. But while Schiavone hit a brick wall in the No3 seed Victoria Azarenka, who found near flawless, form to pummel her Italian opponent off the court, 6-3, 6-0, Kuznetsova led the way into the quarter-finals.

The Russian played a gritty and powerful match against the not dissimilar but left-handed game of No8 seed Angelique Kerber. The Russian was down a break in all three sets, but pulled out both the first and the third to win, 6-4, 4-6, 6-3.

Kuznetsova admitted that things had been difficult of late: “I’ve had some tough times, where I was not kind of playing ‘my’ game. But Grand Slams always bring the best out of me.”

Standing between her and a place in the semis is Williams, who continued her surge through the draw with victory over Roberta Vinci, 6-1, 6-3, the most games Williams has lost in any of her four matches so far.

The world No1, at 31 years old, has looked as fit and determined this year as when she first won the French title a full 11 years ago.

Certainly the stats do not lie. She came into her 11th Roland Garros with a career-best winning streak of 24 matches, now stretched to 28, and with four back-to-back titles—Miami, Charleston, Madrid and Rome. She even fitted in two Fed Cup wins on hard courts in the middle of her clay streak.

That 28-match streak is now the third longest of the millennium, trailing only sister Venus’s 35 in 2000 and Justine Henin’s 32 across the 2007 and 2008 seasons. So seamless has been Serena’s progress, not just here but through most of the year, that she is hot favourite to reach the semis. But while Williams has won six of her last eight meetings against Kuznetsova, one of those losses was in their only Roland Garros meeting: the year the Russian went on to win the title in 2009.

The other top-half semi-final is between last year’s losing finalist, Sara Errani, who battled injury and a 7-5, 4-2 deficit to win her 35th match of the year against Carla Suárez Navarro, and Radwanska, who hit 18 winners to just five errors on her way to her first French Open quarter-final.

As for the defending champion Sharapova, her progress, like that of Williams, has been impressive: She has yet to drop a set, and put together one of the best clay runs of the season to win Stuttgart and reach the final of Madrid.

Illness cut short Sharapova’s Rome campaign but not before she had beaten Sloane Stephens for the loss of just three games in the third round. She will not, therefore, lack confidence in Paris’s fourth round, where the two women meet again.