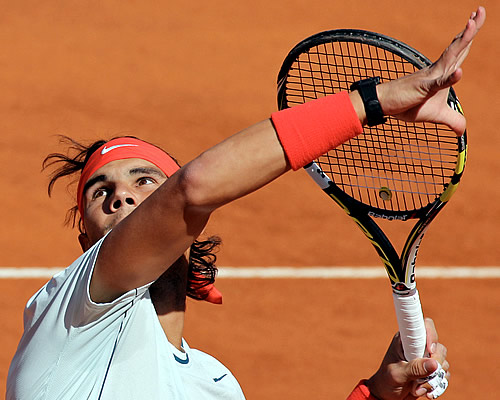 For the organisers of the French Open, men’s semi-final day must have been something of a headache when it came to scheduling.

At the start of the tournament, it was odds on that one of the matches would feature top seed Novak Djokovic and defending champion Rafael Nadal. What may not have been anticipated was that the other would feature, in Jo-Wilfried Tsonga, a French player looking to reach the Roland Garros final for the first time since Henri Leconte in 1988 and possibly become the first French winner in 30 years—Yannick Noah in 1983.

But as Paris gathered around the sunny bowl of Philippe Chatrier at 1pm on final Friday, it was the match that would surely draw world-wide attention, the latest battle between Djokovic and Nadal.

For theirs is one of most intense rivalries in tennis, and their 35th meeting equalled the most between any pair of players in the Open era—and five more than the legendary Nadal-Federer rivalry. And this was the first time since 2009—a run of 11 matches—that they had not met in a final. The longevity of the rivalry, though, just scratched the surface.

Both had big ambitions: Nadal for an unparalleled eighth French Open title, Djokovic to seal a career Grand Slam with the only Major he had yet to win.

Both had something to prove: Nadal that he was still the force in tennis that he had been before his seven-month absence to nurse on-going knee problems; Djokovic that he could fulfil the prophetic words of his first coach, Jelene Gencic—who died during the tournament—that he would be the best in the world and that he would bring home the Coupe des Mousquetaires.

Indeed it might be argued that this match may determine whether Nadal should hand over one of the most tightly-held crowns in tennis, that of the ‘king of clay’. For Djokovic was one of a very rare band of men who had ever beaten Nadal on clay, winning the Madrid and Rome Masters back-to-back in 2011.

The pendulum swung back to Nadal in 2012, with the Spaniard coming out the winner in the Monte Carlo and Rome finals, before beating Djokovic in a rain-disrupted two-day final at Roland Garros last year in four sets.

But coming into their fifth French Open meeting, Djokovic had gained a footing again. In their only meeting since Roland Garros last summer, the Serb beat the eight-time Monte Carlo champion in straight sets, only the Spaniard’s second loss in 50 matches at the tournament.

Since then, Nadal had won 20 straight matches, improving to 41-2 for the year on his way to six titles from eight finals, but Djokovic saw Monte Carlo as highly significant:

“That is something that can maybe give me that mental edge when I step onto the court, knowing I already won against him on clay this season, knowing I can do it, even though not many players in the last 10 years.

“This is the biggest match-up of our Roland Garros campaign for both me and him… I need to be very disciplined and focused in order to get emotionally, physically, and mentally ready for that match.”

He certainly did not lack confidence: “I know the game plan. I’m going to be confident and step into the court with self-belief. I’m going to win: That’s the mindset.”

That both had worked themselves into their best form by their quarter-final matches was clear from the first ball. Both fended off deuce during the first half dozen games as each tested the other on both wings. But the match would see-saw back and forth, just as their rivalry had done through the years.

The first to go off the boil was Djokovic. A slight jolt of the ankle as he lunged to the forehand wing on Nadal’s serve seemed to affect his concentration if not his movement. Serving in the seventh, the Serb found himself facing three deuces and three break points as Nadal made first a forehand passing shot then a down-the-line winner on the same wing, and a third blistering forehand forced the fatal error. Nadal consolidated his break with a love hold and served out the set, 6-3.

The stats reflected the momentum: Djokovic with nine winners to 14 errors, Nadal the opposite. And still the errors cranked up on the Serb’s side, even on his famed and faithful backhand. An 11th on that wing drew a huge roar of anguish while Nadal calmly ignored a time violation warning to hold serve with ease.

It was two forehand errors and a misguided drop shot that brought another break against Djokovic—but the pendulum was about to swing back. Djokovic, who had focused his attack to the wide deuce court, testing the Nadal backhand, now turned to the Nadal forehand wing where he could open up his signature cross-court double hander, and on the third break point, he converted with a volley winner.

Now the Djokovic surge was on, switching his attack back and forth to break again and level the match, 6-3. Both were guilty of a clutch of forced errors but the Djokovic tactics had drawn 15 unforced errors from Nadal, too.

But there was no time to settle. After a real tussle of an opening game, containing the longest rally of the match, Nadal held, and Djokovic seemed to stretch his ankle again, this time retrieving on the backhand wing. Nadal broke and, in the blink of an eye, led 5-0 before Djokovic pulled himself back from 15-40 to take a game.

Again, Nadal was unperturbed by a penalty point as he again stretched his serve preparation towards 30 seconds. He served out the set, 6-1.

Despite a brief departure from the court, there seemed no obvious problem with the Djokovic movement and, as in the first set, some stunning rallies punctuated the first half dozen games with no breaks. Then Nadal went on the rampage to take advantage of a couple of forehand errors from Djokovic and broke in the seventh, only to see the reverse in the next as the Serb broke back with a bullet of a cross-court forehand that made even Nadal smile in disbelief.

The two exchanged flashes of brilliance, errors and games as first Nadal broke again and then Djokovic retaliated to force a tiebreak, and unleashed his best baseline game, fast and penetrating, to lead from start to finish, 7-3.

Nadal and Djokovic, in nine previous Grand Slam matches, had gone to a fifth set only once before—their record-breaking Australian Open final last year. This would not threaten that 5hr 50min epic, especially as Djokovic quickly rode his momentum to break in the opening game, before digging in to fend off a break point in the second.

Nadal seemed subdued, faced deuce at 1-3 down, but withstood renewed pummelling to his backhand with some glorious winners to hold. However there was one more turn to come, in the eighth game. This time, it was Djokovic’s turn for a time warning and, in one of the most dramatic moments of the match, he touched the net after putting away a smash to set up break point. He saved it with another smash, but Nadal sensed his moment and broke at the second chance: It was all square again, 4-4.

The rest of the set saw both men attacking and defending like tigers, yet slowly but surely, Nadal stole the momentum, found his strut, even made a hot-dog winner. He broke at 7-7, now piling up the winners—22 of them as he served and for the match—and stole the win, 9-7, in just over four and a half hours.

It has been an extraordinary five months for Nadal, losing his first final in Chile and then only one more match—to Djokovic—in Monte Carlo. If there was any doubt that Paris was his tennis home, his 58th match-win surely dispelled it. He even spoke in French during his on-court interview, but concluded in English:

“This atmosphere is difficult to find in any other place: For me it is the most special one on the tour.”

One can only have sympathy for the man who survived the second semi-final played out in the evening hours on a cooling Philipp Chatrier. Sunday promised slim pickings for either Tsonga or Ferrer as they bid for their first Grand Slam.