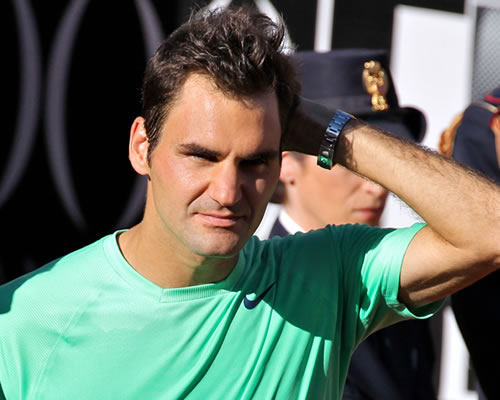 While Andy Murray was waiting in the Queen’s locker room for yet another rain-delayed schedule to get under way, the man who had tracked him on grass through the last 12 months, Roger Federer, was on court and on time.

And yet it was meant to be otherwise: the Aegon Championships had moved its final forward by two hours to beat both weather and the Gerry Weber Open, but the sun shone on Halle—despite its retractable roof—and Swiss-German timing prevailed.

Federer was after a sixth title in his 11th appearance in Halle, and though he had met fellow over-30 Mikhail Youzhny here four times before, this was their first time together in the final. Indeed it was Youzhny’s first grass final anywhere, and the relative records of the two men made even worse reading for Youzhny. In their 14 matches, Federer had always been the victor, and in their last, the quarter-finals at Wimbledon last year, Federer won 6-1, 6-2, 6-2.

But much as Cilic had done at Queen’s, the unseeded Youzhny had proved his form through the week, beating three seeds—No2 Richard Gasquet, No4 Kei Nishikori and No6 Philipp Kohlschreiber—for this special appointment. What’s more, he had beaten top-12 seeds at his three previous tournaments, too.

A former world No8, the intelligent man from Moscow has always possessed the kind of beautiful, varied and aggressive all-court game to suit grass. Youzhny, indeed, is fourth on the list of active grass-court match-winners.

And he played some of his best tennis in years in beating Gasquet in the semis, notching up 41 holds from 42 service games throughout the tournament.

But…Federer had posed a problem for him since their very first meeting 13 years ago. Not that it showed in this stunner of a match that had drama, quality, rally-power and passion on both sides of the net.

Even the first game was tense: Federer held four break point but Youzhny fought them off—fought being the operative word for the tennis of the Russian. Federer held to love in his opener but faced down a break point, too, as they edged to 5-5. Federer may have expected Youzhny’s level to drop but the Russian hammered his single-handed backhand with depth, precision and pace to both corners, taking on the Federer backhand fearlessly.

Now, though, the Swiss earned two more break points, 15-40, but pressed too hard to squander them with forehand errors, and suddenly found himself facing a set point as Youzhny played a great dropshot and lob winner. The Russian defended superbly, forcing three deuces and two volley winners from Federer to hold for a tie-break.

And the Swiss showed uncharacteristic irritation at his growing inability to break through, gesticulating as Youzhny kept pace with him through to 5-5: They stood at 46 points apiece until Youzhny came out the winner of another long backhand exchange to take the tie-break and set, 7 points to 5.

It was just the fourth set the Russian had ever won from Federer, and he did not let up. He played drops, lobs, off-backhands across court and down the line, and stepped into the Federer serve. Again he was the first to repel a break point, roaring with delight as he kept in touch at 3-3. All Federer could do was stand with hands on hips and shake his head.

Then came a switch-up by the Swiss. After two consecutive love holds of serve, the second taken with an audacious forehand smash from the back of the court, he attacked the Youzhny serve to lead 0-40, and the pressure told: The only double fault of the set handed over the first break of the match, and Federer served it out 6-3.

And yet still Youzhny did not acquiesce. Serving first in the third set, he maintained the same high level, hitting his serves at over 125mph, but the better he served, the better Federer served. Each dropped only three points on their first serve in the set, 13 from 16, but Federer now began to hold the more easily.

Not to be outdone, his ace count rose with the speed—little short of 130mph at times—and his forehand punished anything less than perfect from Youzhny. A big return-of-serve winner took the score to 0-40 for three break points and a backhand squeezed down the line did the damage: a crucial break, 4-3.

But only a couple of timely aces and serve-and-volley winners got Federer through a 0-30 deficit in the eighth game, and Youzhny held to force the Swiss to serve it out. With exactly two hours on the clock—an sign of just how intense this battle between such two fast-playing men was—Federer did not waver, striking his 12th ace of the match to seal the title to love.

On another day, one of those where Federer has a couple of lapses in concentration, perhaps misses his serve a few times, Youzhny may have broken his duck. Federer admitted: “He was playing well enough to win.”

The Russian’s unwavering aggression, the quality of his shot-making—and his boldness—drew the best from his old adversary, but as Youzhny put it: “He just played better. In fact, he has been playing better all my life.”

How warming, then, that these two contrasting personalities opted to sit out the preparations for the award ceremony next to one another, chatting like old mates.

But as usual, it was Federer, playing in his 112th career final, who reached another milestone rather than Youzhny. The Swiss man’s sixth Halle title took him to 77 in all, equal third with John McEnroe.

But that was probably of far less moment for Federer than winning his first title of the year. And not for the first time, he seems to be timing his run on his favourite surface for London.

Halle became the third tournament that Federer has won six times: the other two are the World Tour Finals and the one he has taken seven times: Wimbledon.

He concluded: “I feel fit, I feel confident, I’m excited about what’s to come.”