Jose Mourinho is back at Chelsea and ready to settle down

Sparking the customary frenzy of clicks and flashes, he holds up a Chelsea shirt as dozens of photographers desperately call his name. The newly-appointed Happy One remains stern-faced until one snapper shouts: “come on, give us a nice big smile!” He obliges, but only briefly.

Mourinho has made it clear that he wants to get straight down to business.

He is back in west London nine years on from that infamous first unveiling at Stamford Bridge and with another six major trophies under his belt since his departure.

His stock has risen considerably during a European adventure that took him from Milan to Madrid and back to the English capital.

But although he may be back where he feels “loved” at long last, he knows he is under pressure to deliver.

“I want to be clear that I didn’t choose to be a in a comfortable position because I’m back where the fans love me,” he explains.

“I’m coming with the opposite perspective. I have more responsibilities because of that. The expectation is higher, because people know what I can deliver.”

Since his departure back in 2007, only one of the eight Chelsea managers that followed has lasted more than 12 months as Roman Abramovich ruthlessly wielded the axe time and again.

Chelsea’s success, however, has been largely uninterrupted. A further six major trophies – including the club’s first Champions League title – have been added to the Stamford Bridge trophy cabinet since his exit.

Yet Mourinho insists that he is here to deliver what those who have attempted to step into his shadow have not: stability.

The 50-year-old has signed a four-year deal with the Blues but is already talking about extending his stay at the club beyond 2017.

“I am where I want to be,” he repeats. “Now it is up to me to work hard and show my club that I deserve to be here for a long time. I have a contract of four years and I hope we can go to the last day of this contract. In the end, if the club is happy and wants me to stay, I’ll be more than happy.”

He elaborates. “Of course we look for stability. I look for it, the club looks for it. You see the profile of the squad – and it’s asking for that.

“If you want the best direction for 24 or 25-year-old players, they need stability. The club is stable. It has a fantastic structure. But there is also needs stability in football terms – stability in ideas and principles. That’s the only way that we can build a team and reach success again.” 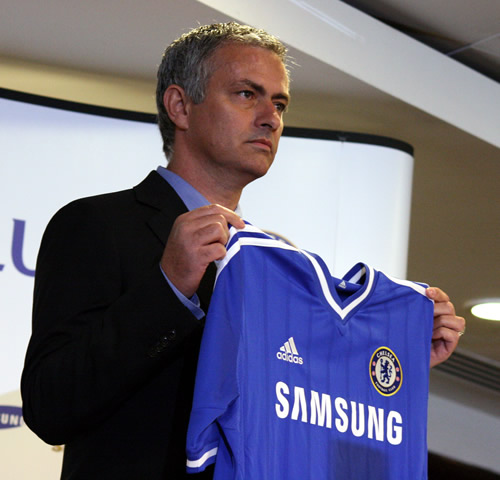 Back at the helm: Mourinho has returned to Stamford Bridge after leaving the club in 2007

The former Porto boss is also quick to play down the reports claiming that a total breakdown of his relationship with Abramovich led to his departure early on in the 2007-08 season.

“I read and I keep hearing that I was sacked and we had a complete break of the relationship but that is not true,” he says. “It was a mutual agreement between me and the club. It was a sad moment. But I do not regret that decision because then I went to Inter Milan where I had the best moment of my career and then I went to Madrid where we still have the record of the best points total in the La Liga’s history.”

Mourinho is worshipped by the English media as a result of the endless stream of distinctly quotable soundbites that still echo around the Stamford Bridge corridors from his first spell in charge of the Blues.

But does he enjoy his weekly exchanges with press as much as the reporters? “No,” he smiles. “But it is part of my job. I have to prioritise. I don’t love it but I have to do it. I try to give you what you want. I try to be open. But what I really want to do is work.

“When I arrived here in 2004, you pushed me a lot in that first news conference to have a strong approach. In this moment, the situation is different. You know my history in the British and European game. I don’t feel I need that approach. I just want to be working every day. I feel I am in the best moment of my career in terms of knowledge and experience.”

So what is his target for next season? “I am humble. Sometimes I don’t look it, but I am,” he continues.

“In 2004, Arsenal were the big power. They won the league without being beaten. They were an absolutely fantastic team. After that, Manchester United tried to be the best.

“We will take it step by step. The first objective will be the top four then top three and then champions. We will try.”

And just like on Monday, the world will be watching.