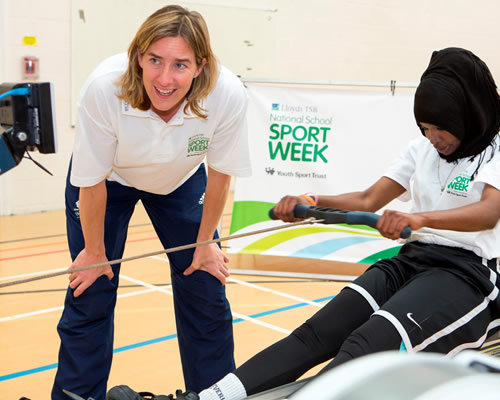 While eyes were on the start of the tennis at Wimbledon just down the road two stars of the London Olympic and Paralympic Games were putting children through their paces as the start of a week-long celebration of sport got under way.

Southfields Academy had more than 210 pupils trying their hand at sports such as rowing, under the expert guidance of Grainger who won women’s double sculls alongside Anna Watkins at London 2012, as well as handball, softball, basketball, water polo, trampolining and boccia.

And Grainger was delighted to not just help get another Lloyds TSB National School Sport Week underway but potentially help get the next generation of Olympic heroes get going, too.

“This is brilliant because there is genuinely so much enthusiasm coming from the kids to get involved in sport,” said Grainger.

“And the lovely thing is that through Lloyds TSB National School Sport Week they get to try new sports that they maybe haven’t done before and there are lots of things to choose from.

“Bits of the week will be competitive while other parts are just kids trying something new and it is just really fun and everyone seems to be loving it.
“With such huge numbers taking part and being introduced to sport through National School Sport Week someone in there has got to be good at it so who knows where their journey will finish.

“But the key thing is just getting them involved because sometimes sport can be quite intimidating if you don’t think you are going to be good at it but this allows them to be introduced to loads of new sports and who knows where it will take them.”

New research from Lloyds TSB revealed that over three million of the pupils who took part in last year’s National School Sport Week are now playing more sport than before.

“For me National School Sport Week is a great celebration of what happened last year and it is an opportunity for the next generation of young people to access new sporting opportunities,” he said.

“To have gold medallists like myself and Katherine is key really to underpin the legacy of sport and I feel that this is where the real legacy is.
“As athletes we should give our time to help start these young people’s journeys and it is fantastic to be a part of that and I have been impressed with what I have seen.”

Receiving some expert advice from the stars of London 2012 was 15-year-old Southfields Academy pupil Tia Rankine.

And despite Tia having volunteered during the London 2012 Paralympics at the British Gardens, she was more than happy to help her younger pupils discover something new.

“I love National School Sport Week and think it is a great idea because it is a chance to show younger kids what is out there and explain that they have more choices,” Tia said.

“I am playing sport but I am also volunteering because I think it is important to help out when you can and show off these great new sports.”